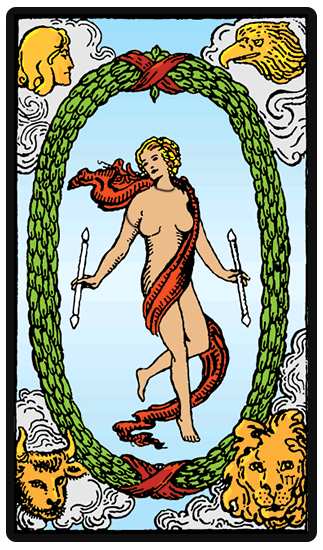 The World card in the tarot deck has a dancing figure at the center. The dancing figure on the card has one leg crossed over the other and holds a wand in either hand. She symbolizes balance and evolution in movement. The fulfillment and unity that she represents is not one that is static, but ever-changing, dynamic and eternal.

The green wreath of flowers that surrounds the central figure is a symbol of success, while the red ribbons that wrap around it are reminiscent of infinity. There are four figures on each corner of the card - and they are the same ones that are in the Wheel of Fortune. The four figures represent Scorpio, Leo, Aquarius and Taurus - representative of the four corners of the universe, the four elements, and the four evangelicals. Together, they symbolize the harmony between all of their energies.

To encounter the World in your cards is to encounter a great unity and wholeness. It symbolizes the moment when the inner and the outer worlds - self and other - become a single entity. In some traditions, this state is described as enlightenment, or nirvana. There is a recognition that the individual self is profoundly linked with all other things, and that we all dance and sway along the flow of life to one rhythm. Not only do you hear this rhythm, but you participate in it - following the dips and the rises, the joys and the sorrows.

The meaning of the World card is fulfillment, achievement, and completion. This shows that all the efforts that you have been putting in place are starting to pay off. It reflects that you have completed a major milestone in your life and you have built the resilience to withstand challenges. The World may indicate completion of a long-term project, study or any other major event in your life. It may also mean the birth of a child, marriage, graduation or any other thing that you have accomplished.

The World card shows that you have a desire to give back to the community in various ways. You have a commitment to make the world a better place because you understand that everything is connected.


World how someone sees you

World as how someone sees you

- he/she has achieved all he/she could from you;
- Positive light - you are seen as the person representing their fulfillment. In other words....the one. They think they will get the full package with you and make you their world. So all the obvious relationship cards plus happiness cards would confirm this;
- Negative light - this is as a good as it's going to get. Generally get this meaning when the world is seen in combination with an ending card like 10 swords, 8 cups, 5 cups, tower, 6 swords. The relationship has gone to completion, it will not develop beyond where it is.

You are drawing near to something that marks the end of a journey or an era. You may have many accomplishments that have lined your path, but there is a strange emptiness that fills you when you look backwards upon it, as if you have all the pieces but they are not coming together. What is missing? Do you feel connected to what you're doing? Do you feel connected to others? What alienates you from feeling complete? From feeling whole?

The path you are on will eventually bring you full circle. It may take a while to realize this, but the journey will allow you to accept new responsibilities and points of view.

The present moment will bring you the fulfillment of a wish or a long desired change in scenery. To find satisfaction, you must accept the ideas of others to be equally valid as your own.