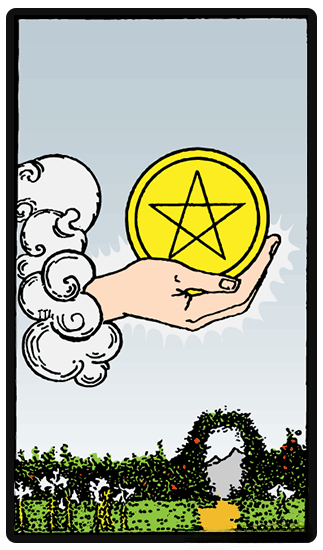 In this card, there is a single mysterious hand that comes out of the clouds. In the hand is what looks like a gold coin with a pentagram engraved on its surface. This pentacle is associated with the element of earth, and seen as a sign of wealth and all things material and earthly. Below the hand is a garden which appears to be flourishing with flowers and other kinds of vegetation - giving off the aura of fertility, growth and prosperity. The mountain represents the ambition required to drive one's search for the pentacle. The flowing creek seem to indicate that emotions are flowing towards this ambition.

One also has to make sure that they are psychologically prepared for the opportunities that are appearing. To be able to harvest the gift of the pentacles, we need to be filled with the calm that stability brings - this is a kind of spiritual prosperity, if you will. This kind of mindset can mean we become open to trying new things and not sticking to the old, washed out routine.

Though the Ace of Pentacles usually heralds an opportunity of some sort that would lead to great gains, to see it reversed can mean that this might be a poor investment, requiring much more resources than you had initially reserved - or alternatively, you might be missing your chance.
When one gets a reversed Ace of Pentacles, it may mean that they are about to face hard financial times as well as a lot of elusive opportunities. At this time, you are being advised against taking large financial risks and to think all your choices through when you are given a deal.

It might also be a good time for an individual to seek advice from others and avoid making rushed decisions since the time isn t just right. It wouldn t be a good time for one to jump into a new job or business opportunity - especially if the main motivation for joining is to pursue prospects of higher financial gain. It might just be an illusion that can lead to your downfall.

Your time has been well spent and you will eventually achieve the success you desire. The projects you have begun will pay off.

Reassuring news will come to you. It may help you realize that you are on the appropriate path to receive the recognition and material rewards you deserve.

Cards combinations of Ace of Pentacles

All Ace of Pentacles combinations