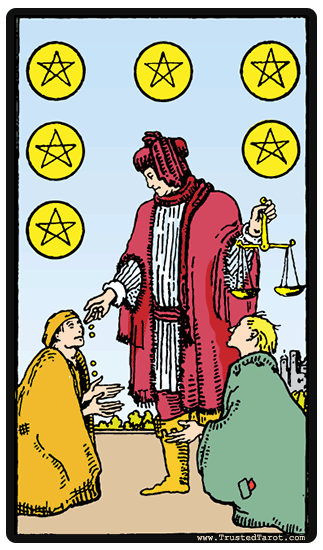 In the image on the Six of Pentacles, there is a man who is dressed in purple robes. The color purple symbolizes is the status and wealth of this man. He has a scale that is balanced in one hand, which stands for equality and fairness. We are reminded of the Justice tarot card, which suggests karma, cause and effect, and that we receive what we give. His other hand is giving money to two beggars who are kneeling at his feet. The Six of Pentacles suggests that you are in a secure enough position to give to others without affecting your own stability.

If the card is showing you are one of the beggars, you could be receiving someone else s charity. This could help you recover, so take the help - you will be able to repay the kindness in the future. You may also be able to find ways of becoming self-sufficient in the future. Despite this situation, you should be mindful that you should not become desperate or submissive during this time.


Six of Pentacles how someone sees you

Six of Pentacles as how someone sees you

- someone who is giving and generous unless ill dinified;
- Someone generous;
-It may also mean she saw you in a position of power/authority (the one giving out the money) or saw you in a subordinate/lacking power position (as the two who are receiving the money);
- Achieving that balance ( Upright );
- Difficulty in achieving that balance ( Reversed );
- Someone who once helped out, did them a favor;
- Being in charge, being assertive and dominating the relationship but also being generous and supportive as well.

The Six of Pentacles reversed can suggest that charity can be one-way. If you have loaned someone money, you should not be expecting your money to be paid back, or your favor to be returned in the future. You should be cautious about the people you are lending money to, especially if you are not financially stable. You could also have problems with spending and giving away more than you can really afford.

The Six of Pentacles reversed can also warn you about the debts that you have. This could mean that you are in over your head and it is going to come back and be a major problem in the future. You should also be careful of entering business endeavors during this time because you could end up with a huge loss, instead of getting a return on your investment.

The last Six of Pentacles reversal meaning is that there is selfishness related to giving and charity. This may mean that you are willing to give others in a way that is not to benefit them, but to benefit yourself. You should be cautious that you are not just being charitable to prove you are giving or generous to others. The source of generosity should be selfless, not selfish.

Your fair consideration of others in the past will lead you to success in the present.

Your fervour for life and faith in your own talents will be renewed. The joy of being able to help someone in need will illuminate the bigger picture.

Cards combinations of Six of Pentacles

All Six of Pentacles combinations