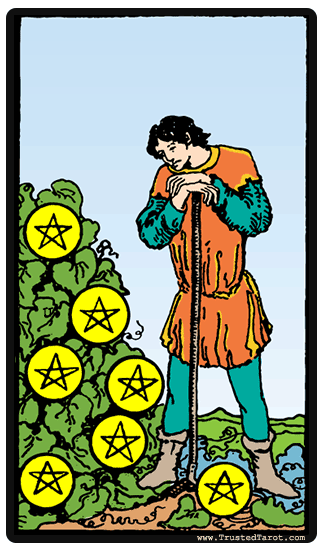 The Seven of Pentacles shows a young man who seems to be taking a break from his hard labor to admire the fruit and blossoms in his garden. He rests on his shovel as he is admiring the seven pentacles hanging from the lush green vegetation. The way that he is laying his head over hands seems to suggest a kind of fatigue - he has worked hard to make sure that this year's crop is a good one. Because he is focused on long term goals, he cannot touch his harvest right now, and only reserves one of the pentacles for himself, choosing to invest the others. With his efforts, he hopes to grow his crop for the long term.

The meaning of the Seven of Pentacles relates to investment and effort. It follows the Six of Pentacles which refers to the end of financial or material hardship. If you have been putting in time and effort in your work, it signifies that your efforts are paying off and they are going to pay off in the future as well.

The Seven of Pentacles reversed means that your returns may be scattered for now. It could also mean that the rewards of your labor are not as significant as you thought. The advantage of this is that it shows that you know when to stop investing your time, money or energy in a particular project. You, therefore, need to reevaluate your choices, and figure out where you should put your resources. The Seven of Pentacles reversal meaning could also be applied to relationships and the effort and emotions that you have invested.

The Seven of Pentacles symbolism often deals with business ventures and investments. However, it also cuts across relationships, viewed as investments as well. The effort put into these investments could be time, money and hard work.

The delays in your projects have been affecting you, but do not lose hope. Your perseverance will lead you to success.

The long period of hard work you are currently in will bring you much personal growth and achievement.

Cards combinations of Seven of Pentacles

All Seven of Pentacles combinations