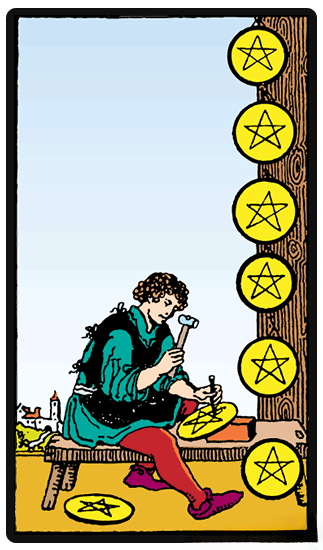 The Eight of Pentacles card depicts a young man who is etching a pentacle shape into the eight golden coins. The card symbolizes someone who is completely focused and absorbed in what they are doing. The town that is far in the background means that he successfully isolated himself from the distractions so that he can fully concentrate on his task. The Eight of Pentacles refers to that moments in your life when you are dedicated to completing a certain task. You are fully-immersed, and you are committed in delivering the best version of your work.

On the matters of finances, The Eight of Pentacles may signify financial assistance that you have been hoping to receive. Be careful on how you are going to spend this money, remember that this is a fruit of your hard labor and not luck. When it comes to health, the Eight of Pentacles can mean that it is time for you to commit and work hard in order to improve your health - you must stay vigilant about exercise and diet.

When reversed, the Eight of Pentacles signifies something similar to the upright position, but the tasks may be even more demanding. This means that you need to execute swiftly and with great care if you want to be happy and successful with this outcome. In terms of work, the Eight of Pentacles reversed refers to the importance of impressing your employer through your diligence, dedication and intelligence. Never avoid any task or responsibility in your work - or else this can damage your reputation. In love, the Eight of Pentacles may reveal that both of you may not be prepared to handle the responsibilities to make your relationship work.

With regards to finances, you may be delusional about your current financial state. Perhaps you are currently relying on pure luck to make it. While there is absolutely nothing wrong with dreaming, you should understand that you should be patient and be ready to work hard if you want to improve your standing. In relation to health, the Eight of Pentacles reversed may point to a situation that is worrying you, but you have no idea how to fix it. Never be afraid to ask the help of a medical professional to help you understand your condition and improve.

The skills you are mastering will lead you to success down the road. Continue developing and you will reach a moment of epiphany.

By developing your talents, you will find success in your efforts. Investing in yourself now will lead to greater rewards later.

The future holds a successful career or spiritual endeavour for you. The amount of acclaim you receive will depend on the amount of time you have spent determining and mastering your skills.

The Eight of Pentacles is a card suggesting an improvement of skills and studiousness. It shows a desirable career and acquiring new skills just ahead as long as you use discretion and take a balanced approach. The outlook from this card is positive. Yes is your answer.

Cards combinations of Eight of Pentacles

All Eight of Pentacles combinations