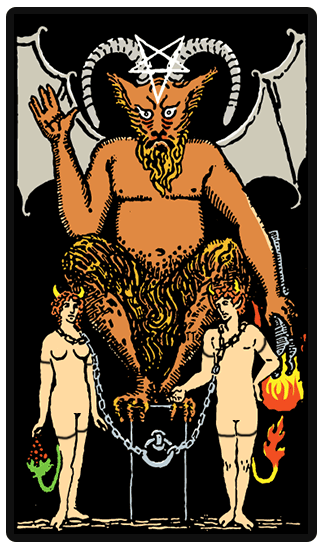 This card shows the Devil represented in his most well-known satyr form, otherwise known as Baphomet. Along with being half goat and half man, the devil has bat wings and an inverted pentagram on his forehead. He is standing on a pedestal, to which are chained a nude man and woman, as if to show that he has dominion over them.

Both the man and the woman have horns, as if to show that the more time they spend with the Devil, the less human they become. The chains make it appear as though the devil has taken them captive. The man has a flame on his tail while a woman has a bowl of grapes on her tail, which symbolizes their addiction to power and finer things in life, respectively.

Looking closely, both the man and the woman don t look happy.  Their individual power has been taken from them, leaving them exposed and ashamed in their nakedness.

Getting the devil card in your reading shows that you have feelings of entrapment, emptiness and lack of fulfillment in your life. It might also mean that you are a slave to materialism and opulence and no matter how hard you try, you just can t seem to shake off the feeling of wanting to indulge in luxurious living.