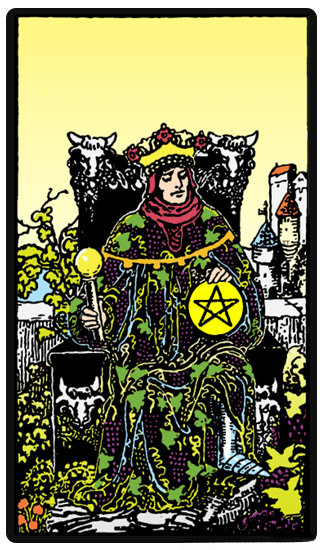 The King of Pentacles refers to a man of high ambition, materialistic satisfaction, and worldly success. The King of Pentacles is sitting on a throne that is adorned with vines and bull carvings, and the robe that he is wearing is embroidered with many images of grapevines. He looks sophisticated and regal. He is also surrounded by different types of plants, vines, and flowers which depicts this king s attainment of materialistic success. He holds a scepter in his right hand and the coin with a pentacles engraved on it in his left hand. The castle can be seen behind him, which is a symbol of his determination and effort.

With regards to finances, the King of Pentacles is one of the best cards to receive. This may mean that your financial situation is stable as a result of your wise investments and hard work. In case you are taking a gamble, be sure to initiate a calculated action.

When reversed, the King of Pentacles falls from his throne. Once the king of a prosperous kingdom, it has been taken away from him, or lost. Disconnected from the energy of his suit, he may have been impatient, he may have been too indulgent, he may have gambled too far and overstretched himself, he may have sought shortcuts that led him to ruin. He may become too focused on the material, only understanding the cost of things, and never their value.
The King of Pentacles reversed may also signify that your definition of success and happiness is only determined by outer appearances, and not by the true value that security and stability can bring to you. It is a time for you to cultivate an more wholistic attitude to the material world to find an authentic happiness. In terms of love, this card can mean that someone dear to you is currently facing issues due to matters concerning his or her career.

When it comes to finances, the King of Pentacles reversed is telling you to look at the long-term goal. You may be facing financial issues but do not look at yourself as a failure. Stay positive and understand that this is just a phase in your life. When given the chance again, do not make choices based only on the short-term picture.
The King of Pentacles' appearance in a reading can indicate some sort of material loss or loss in reputation - beware that you do not replicate his mistakes.

The cautious progress you have been making is leading you towards success. The advice you recently received will be helpful in achieving your goals.

The idealism you have shown has made you confident and reliable, but it may do better to begin focusing on your financial security for a period. Consulting a professional or elder will help protect your efforts.

Cards combinations of King of Pentacles

All King of Pentacles combinations