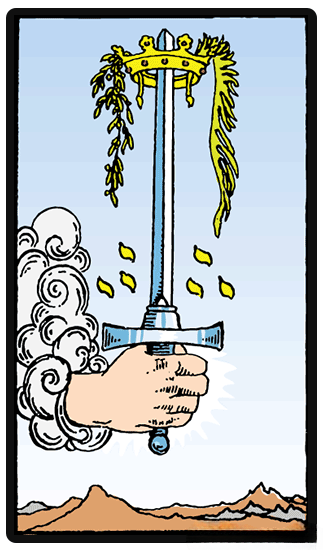 The Ace of Swords shows a hand emerging from the clouds wielding a double-edged sword. This double edged sword carries a golden crown while being encircled by a wreath. The wreath has for a long time been associated with victory, success and great achievement.

The crown is used as the symbol for both royalty and the power to rule that comes with royalty.

Behind the foreground, the sword stands floating over a varied setting - which holds both mountains and sea, which are used as symbols of the vast reach and distant lands that the swords can be used to conquer, as well as ambition.


Ace of Swords how someone sees you

Ace of Swords as how someone sees you

- Ace is always good in relationship. It means a new beginning with a lot of communication;
- There may be some other possible translations on this as well; if someone sees you as the Ace of Swords, it can be that they see you as an intellectual/scholarly person - or possibly as someone who loves to think from a place of logic and knowledge, using their intelligence to guide their decisions. They look at you and see you as someone who is well read, and uses facts and rational concepts to make decisions. That is my own personal experience with this card, so it is only a thought based on my experience. For how they feel towards you or about a relationship; the Aces are often new beginnings as you indicated. Maybe they feel they would be challenged in new ways or would learn a great deal from you. Perhaps however, they may see you as more of an intellectual that they would like to connect with from a mental level and possibly not romantically - but I would consider multiple cards in a reading to clarify. For this, it would really depend on what they want in a relationship. Someone who wants to be challenged and emotionally and intellectually connected could certainly feel like the "Ace of Swords".

Getting a reversed Ace of Swords might mean that one's thoughts are confused, unsure and very chaotic. This isn t a good time for one to make any decisions since they don t have any clarity on what you should be doing, meaning that the chances of failure can be pretty high.

At this time, it would be better to prepare yourself and take baby steps - work methodically as you slowly move towards achieving your goals. This would be a good time to lay back and rationally think your way through each stage rather than acting on impulse, since everything appears in a blur and is not very clear at that moment. It might also be a good time to seek advice since things may not be as they seem.

You have fought in the name of good, adding your intense energy to an idealistic cause. The events of the recent past have set unchangeable events in motion.

You are entering a new phase of your life and everything is going to change. The causes and results of the change are not certain, but this period will reveal many things to you.

Cards combinations of Ace of Swords

All Ace of Swords combinations