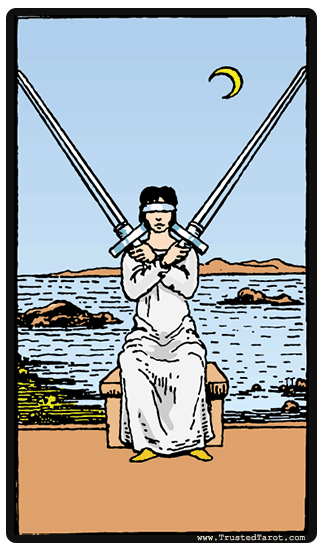 The Two of Swords symbolizes the confusion we face when we are forced to make difficult choices. In the Two of Swords card, there is a seated woman that is blindfolded while holding a sword in each of her hands. In the background, there is a sea surrounded by crags and rocks that serve as obstacles for vessels and ships, stalling progress and action. The woman in the card being blindfolded is a representation of a situation which prevents her from seeing both the problem and the solution with clarity.
The swords that she is holding in each of her hands show that there are two choices that lead in different directions and are mutually exclusive to one another. It may also depict a stalemate, which means that the problem should be addressed with a logical and rational thinking. The Moon positioned on the right side of the card signifies may signify the role of illusions and deception in the difficulty that the woman has in making a choice.

When we see the Two of Swords in a reading, we are encountering a stalemate. Two equal and opposing forces are joined in battle, and there seems to be no end in sight. This wasn't what you had in mind when you chanced to walk down this path, and you find yourself caught in the middle. Without something, or someone to intervene, this may continue indefinitely. We find ourselves in a situation where we must make a choice, we can side with one part of the situation, or we can side with the other. Neither seems particularly appealing, which makes the decision even more difficult. But unless we move past this stalemate, there can be no more progress.
We find ourselves in a situation where we must make a choice...Neither seems particularly appealing.
The Two of Swords is often related with balance and partnership. It signifies the need to keep your relationships balanced. Regardless if it is in business, friendship or romantic relationship, you may find yourself struggling to maintain the current state of affairs, and may find yourself caught in the middle.  In regards to your work, you may be currently stuck in limbo and are perhaps waiting on another party's decision. Remain patient and avoid pressuring people in making their decision abruptly.

The Two of Swords meaning may depict a warning to have caution. Like the woman in the card, you may be choosing to keep the blindfold on, hoping the problem will just go away. You should avoid evading any issues that you are facing, since it will not solve your problems.

The situation we see in the reversed Two of Swords is a stalemate of a legendary kind, one where two forces are battling each other. This battle can be representative of both something internal or external, and you are forced to be in between and be the decision maker. However, because neither party seems particularly pleasing to work with, you may find yourself confused, the pressure is too much, and you are unable to make a decision.
When you do make the decision, it will be choosing between two bad outcomes. Do not worry, the more important thing here is to make a choice, from then on, we can deal with whatever consequences come.

Being honest about your past will help you to make a difficult choice. The conflict that you have been experiencing will be resolved by a new approach.

There is a conflict that will lock up your energies in the effort to resolve it. By overcoming indecision, you will take deliberate action to decide the resolution.

Cards combinations of Two of Swords

All Two of Swords combinations