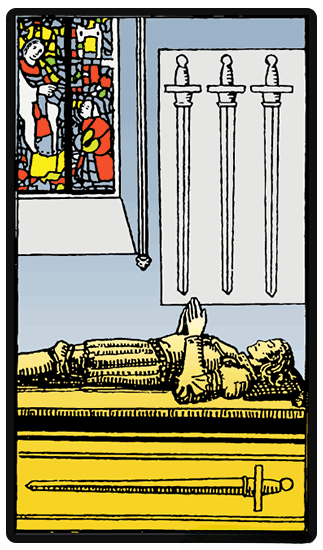 There is a quiet stillness that is present in the Four of Swords, a sense of calm peace that is contrasted so deeply with the pain in the Three of Swords. Here, in a church, there is a carving of a knight that lies upon a tomb with three swords hanging above him while the fourth one lies beneath him. These three swords are a reminder of the suffering that he has endured in the earlier card. The position of the fourth sword seems to be a signal that the fight has ended. A child and a woman are depicted by the stained glass place behind the statue, giving the scene a sense of warmth and welcoming after the retreat. The knight has his hands positioned as if he is praying.

The Four of Swords indicates it is time to gather new strength and prepare to face a new challenge. You have faced crisis after crisis, and it is wearing you out. You can face a new challenge only after getting away from everything and embracing a new atmosphere.
Take the time to nurture yourself to re-enter life. Within us glimmers hope, and it lies quietly, waiting to reveal itself after we are healed anew.

Although the Four of Swords card in a reading could mean it s time for healing, a reversed card could mean restlessness. Your heart is willing to relax, but this is not what your mind wants. You feel that you have too much that is depending on you. Following this path is not advised, as it could have affects on your health.

You can continue to fight, but sometimes that is ineffectual and you must have enough awareness of your own strength to decide when to back out. To rest, to retreat, is a means of self love sometimes, and though you may try to push ahead, that will only make it difficult for you in the long term.

The plans you have already made may not properly guide you through the changes coming. The shadow you have felt hanging over you will soon pass, and the warmth of your life will return.

Organize and examine your thoughts in solitude. Your dormant qualities of inner strength and self respect will guide you.

Cards combinations of Four of Swords

All Four of Swords combinations