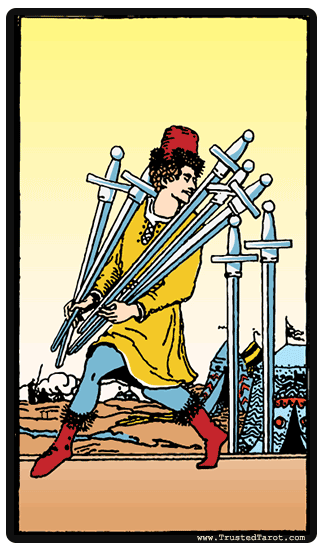 In the Seven of Swords card, there is a man that is seen running away sneakily from a camp of some sort, while carrying five swords in his hands. Behind him, two other swords are on standing on the ground. From this image, we can deduce that the Seven of Swords is about stealth, getting away with something, deception or betrayal.

The expression on the man s face shows quite a bit of confidence, and he seems to be sure of his success on this mission of stealing the swords. Unfortunately for him though, on the left there seems to be a group of soldiers who have discovered the theft and one soldier is actually raising a flag or a weapon as if to signal his pursuit.

There are instances when the Seven of Swords may indicate the willingness to go solo. You may have the urge to explore and discover some things on your own. This can be an effective approach if you want to assert your independence and bypass group agreement. The Seven of Swords symbolism may be encouraging you to go on this path; sometimes innovation comes from a rogue genius.


Seven of Swords how someone sees you

Seven of Swords as how someone sees you

- short person;
- someone who appears small and vulnerable;
- wears baggy clothing, making them look like they're lost in them (secretive, keeping to themselves);
- trying to hide their body - covered or modestly dressed or dressed for cold weather;
- someone hunching and (again, keeping to themselves quite literally);
- crossed arms;
- angry or worried face or someone giving a unpleasant look to someone else;
- someone scared or anxious, shaking, cold or ill and pale looking;
- weightloss;
- the power of wondering what's going on under those clothes;
- they dont see you physically, perhaps hiding behind your clothes.

The Seven of Swords reversed can have multiple meanings depending on the context of the other cards within the reading. It can suggest firstly a need to change your approach - the tactics you've been using are not working. While upright, this card can stand for a cunning victory attained by deception and trickery, the reversal can stand for either a more extreme version of such behavior. Or instead, a kind of renewal of conscience. You or someone in your circle may be deciding to unburden themselves with their guilt, and come clean about some piece of manipulation they have been involved in. Trust has been broken, but with a confession, you may be on the road to repairing it. There is a desire here to try and do things in a different way, one that is collaborative rather than independent.

It may be time to put some of your projects on the back burner in order to give more attention to more pressing issues. The plans you have made are not coming together as nicely as you hoped.

The best way through a recent conflict will be through diplomacy and cleverness. Avoid overt confrontations.

Your success in the future depends on your ability to overcome opposition. The strategy you choose will determine whether you suffer losses or come out ahead. Assessing the opposition will make your actions better informed.

The Seven of Swords brings failure as well as obvious pessimism. It suggests the possibility of theft or not living up to your full potential in the future either due to unknown opponents or possibly because of mental procrastination on your part. The answer you are looking for is no.

Cards combinations of Seven of Swords

All Seven of Swords combinations