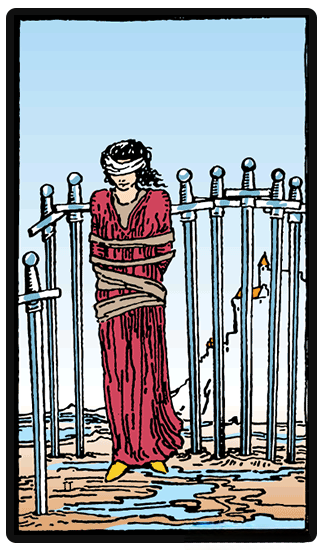 On the Eight of Swords is a woman who is tied up and blindfolded. There are eight swords placed strategically around her in a way that restricts her movement as though she is in some kind of trap or jail. However, it seems as though whoever built the trap was a little lazy or hasty, leaving some open space where she could escape. But because of the blindfold preventing the woman from seeing, she has no way of finding her way out of this trap. The barren land around her might signify a lack of creativity of some sort, while the grey sky in the background can signify despair, since there she feels that there is no hope of her breaking free from the kind of situation that she is bound to. If only she could take the blindfold off, she would see that she could simply just walk out of this situation.


Eight of Swords how someone sees you

Eight of Swords as how someone sees you

- who could be victimized; Like he/she unable to think or act for herself. She could be just a puppet for someone who is more dominant;
- as a person trapped in her own fears about love relationships, so he's aware of what's going on in her mind;
- Difficult to get through.

Getting the reversed Eight of Swords is a good sign, since it shows maturity and self-acceptance, and a recognition of one's own power and responsibility - especially after a long struggle of doubt. It means that one is capable of making conscious decisions because they are confident in who they are, and their power to affect change in both themselves and the world. It's time to free ones self from the past and proverbially clear out their closet, creating room for new things and experiences.

The desire to avoid confrontation stems from your aversion to causing others pain. This is an admirable trait, but may prevent you from acting on your best interests.

The obstacles before you will only be overcome by your courage and patience. The demands of others are locking you up and restricting you from growing.

Cards combinations of Eight of Swords

All Eight of Swords combinations