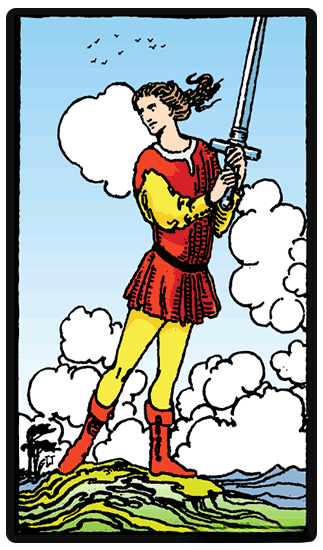 The Page of Swords card is representative of a person in one's life who shows an abundance of energy. With wind-blown trees, turbulent clouds and the their tossed hair, a youth stands proudly on a rocky precipice. This energetic youth has a sword in her hands. Her expression is one of determination, and perhaps a little bit of defiance - she seems ready to pounce at the slightest word.


Page of Swords how someone sees you

Page of Swords as how someone sees you

- Page of Swords is also a clever & inquisitive card. Very fond of information & would like to know e-v-e-r-y-thing. But a page of Swords also likes to keep it's distance a bit, to be a bit cautious;
- This page is a very annoying person;
- page of sword can be seen as security-minded, someone who needs concrete results, persevering, patient, down to earth, sensual and sometimes reserved.

When the Page of Swords is reversed, all the negative characteristics of her come out - and she may become almost dangerous. Being gifted with a sharp and alert mind, she may be using it for deception and manipulation. The sword that she wields may be used to create pain, her natural gift for language turned to a weapon. She may lack the understanding or the maturity to understand the suffering that she causes, feeling the rush that one gets upon lashing out. On the other hand, this page may be someone of empty words or promises - who though loves talking, does not really talk about much of substance. Take care to show strength and action behind your words, for you may be damaging your reputation.

The abilities that lay dormant within you are being brought to the surface. The events of your past are leading you to activity, and the time to carve out your own path is at hand.

There is unexpected news on its way. In order to benefit from the changes coming, you must rely on your intelligence and ability to adapt.

There is a deep desire for change that is making you irritable and agitated. Seeking true independence of mind will lead you to a clearer perception of your motivation and others'.

There is a deep desire for change that is making you irritable and agitated. Seeking true independence of mind will lead you to a clearer perception of your motivation and others'.

Cards combinations of Page of Swords

All Page of Swords combinations