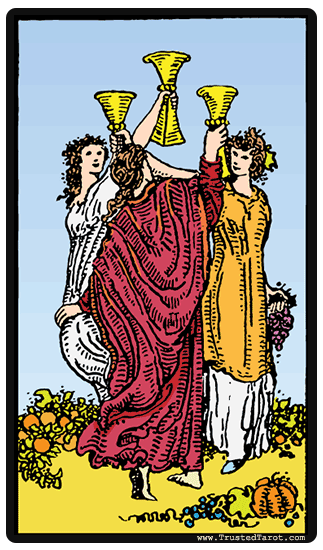 When you draw the Three of Cups, you will see three women lifting their cups up in the air in a celebration of some sort. Good times are in the air, for the three ladies have wreaths made of flowers in their hair. Wreaths are often associated with success and victory, so their happiness is well deserved. The ladies are also seen standing on top of a field of flowers and fruit, further adding to the joyful feelings in this card. There are feelings of beauty, growth, compassion and happiness that the women share between each other.
An interesting note though, in the Rider-Waite the woman in the middle is turned away from the reader and her face hidden from view. However, the two other maidens are seen smiling.

If you've had problems with your social life, this card can signal the end of those hardships. You will be able to resolve differences and learn how to deal with the problem.


Three of Cups how someone sees you

Three of Cups as how someone sees you

- means someone who likes to socialize;
- it could be that they see you as someone who wants to have fun and is light hearted;
- this indicates someone that is a pleasure to be around.

When the Three of Cups is reversed, it means that you may have no time to socialize or go out with friends. You may be too busy with school or work that you can t spare some time to have fun. The Three of Cups reversed can also mean losing touch with some of your friends. As time passes, you may find that you are growing apart from one another. When we grow older, we must put in effort to make sure that our friendships are not neglected.
Alternatively, the Three of Cups reversed can mean that there is a lack of balance and harmony within your social circle. Gossip and scandal can rear their ugly heads. Perhaps there is envy hidden within this circle, and as a result, you are feeling isolated.

There is abundant energy gathering around this moment that signifies you are approaching a new phase of life.

Cards combinations of Three of Cups

All Three of Cups combinations