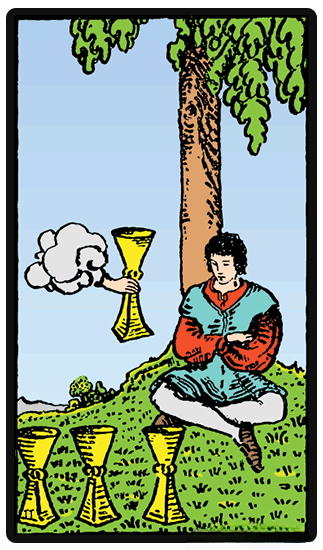 The Four of Cups displays a young man sitting under a tree on a mountaintop, far from others. He seems to be in contemplation and meditation. In front of him are three cups laying on the grass while another cup is being offered to him by a hand in the air. The man has crossed his hand and legs, and he is looking down at the three cups, unimpressed, such that he cannot see the cup being presented to him by the stretched arm.
The Four of Cups represents our tendency to take for granted the things that we have, making it hard for us to see what treasures the universe presents us with. We tend to have the answers to our troubles right around us, but we tend to focus too much on what we do not have.


Four of Cups how someone sees you

Four of Cups as how someone sees you

- Fours are about stability and Cups are about emotion, so it's about emotional stability. Some people, perhaps an unfortunate majority, like the glamour and newsworthiness of intensity and emotional instability, and it is true that someone in an emotionally stable relationship has no dramas to workshop with her friends over a coffee, so perhaps she's boring - to others.

While in the upright four of cups, you may be suffering from apathy and ignore the opportunities that the universe offers you, the reversed four of cups signals the desire to have a new start.
The sudden awareness of the transient beauty of life may strike you now, while previously you may have been too deeply disconnected from yourself to see it. You are coming to the understanding that though life is not perfect, there is beauty in it, and joy comes from choosing to see this beauty.
Embrace new ideas, new people and new places; because you never know where these adventures can take you. Many may miss these chances because they are too confined in their own beliefs and ambitions.

You are discontent and nothing is changing to influence this. Your desire for change will be the most powerful impetus for the world around you to change. Take a new approach in order to transform your circumstances.

Do not be afraid to move forward. Instead, fear becoming overly content. Seek new paths in order to progress on new levels.

Cards combinations of Four of Cups

All Four of Cups combinations