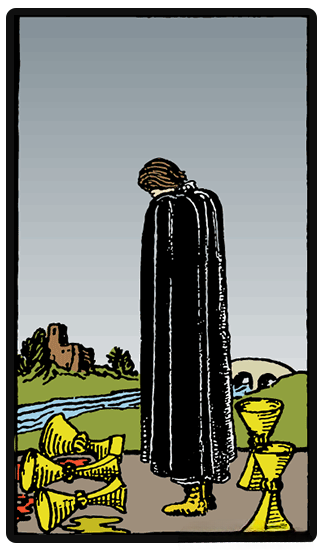 There are certain Tarot cards whose imagery immediately conjure up negative emotions, and the Five of Cups carries such weight. This is a card which signifies loss as well as the painful challenges which stem from that particular loss.

The card depicts a figure that is wearing a black cloak. The person hides his face in what seems to be despair. There are five cups on the ground, three of which have fallen while the other two remain standing. The person, however, seem to notice that there are two standing cups as is too busy mourning over those which are fallen. There is a powerful river which flows between him and a house or a castle in the distance, indicating that a torrent of emotions have separated him from home.


Five of Cups how someone sees you

Five of Cups as how someone sees you

- If this is a relationship, maybe a larger (not too big, just a few cards) spread would help clarify how things are going as they affect you both;
- If it's not an existing relationship but someone you like and haven't revealed your feelings to, then maybe a spread of a few cards on how to break the ice would help;
- What do I (or the querent) need and have a right to know about [name's] feelings (or thoughts or attitude) toward [person or situation]?

When the card is reversed, the Five of Cups shows a significant recovery from the regret as well as proper acceptance of your past. You are beginning to realize all of the implications of your actions, and you have finally come to appreciate the lessons which can be learned from that experience. You may even start to recognize the overall value of the painful experience you had in the larger scheme of things. You are seeing that the suffering and grief that you endured gave you strength and imbued you with resilience. You are ready to pick up the two remaining cups which are still full and go on with your life in full force.

The urge to try something new is a result of a disappointment or dissatisfaction you have experienced. Your current sadness is an expression of these failed expectations.

Explore any alternatives paths that you discover. But if you avoiding the truth, it will be difficult to create any sustainable satisfaction.

Cards combinations of Five of Cups

All Five of Cups combinations