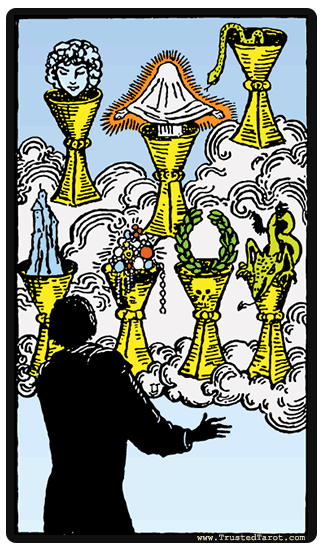 The Seven of Cups symbolizes imagination, choice, wishful thinking, illusion and fantasy. The card shows person with their back turned towards us, contemplating 7 images that are creeping out of the cups, all of which are floating in the clouds. Clouds are a representation of dreams, illusions, thoughts and imagination. There are numerous fantasies that are appearing from the cups, which are representative of the many visions that one sees while dreaming. The Seven of Cups may imply that you have a number of options to choose from.

To draw the Seven of Cups in a reading shows that you need to clearly see the shadows and visions in your imagination, not only in your dreams but also in the real world. You should be careful of wishful thinking and be alert of the choices that you make. In one sense, the Seven of Cups indicates that you are a dreamer who is both excited and afraid of the things that you see in your unconscious. In another, the Seven of Cups is a reminder that although it is good to have dreams and wishes, it is even better to take action attaining those dreams. At one point in life, you will need to stop fantasizing and face the reality of life.


Seven of Cups how someone sees you

Seven of Cups as how someone sees you

- a possession;
- materialistic;
- wanting to live in denial, refusing to see the truth;
- someone wanting others to be jealous;
- learning what is important and what is not;
- appearing to have it all, while really you have nothing;
- wanting to be better than the Jones's;
- putting value in things that don't really matter;
- hiding the putrid truth;
- making all kinds of excuses, to be or not to be ...;
- someone who thinks outside the box;
- sees you as an important *someone* but is confused exactly what it is about you that he finds so damned attractive!

You have lost a lot of time chasing the many conflicting interests in your life. Do not be misled by daydreams and fantasies; pick a practical goal and start working.

You will receive a surprising reward for your usual mental and creative activities.

Cards combinations of Seven of Cups

All Seven of Cups combinations