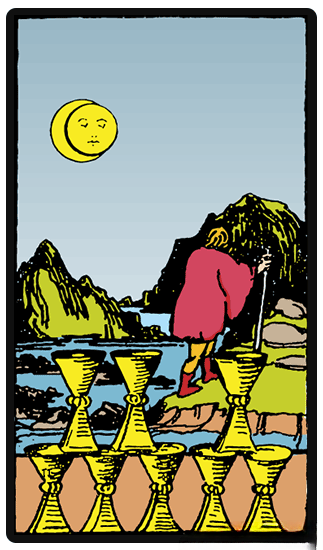 In the Eight of Cups, we are confronted with the moment of transition. We see a cloaked figure taking off to a barren land leaving behind eight golden cups. He is tired of what those cups that he has spent so much time collecting, and is now setting out to seeking a higher purpose. It may be a result of a boredom or unhappiness that comes with realizing that whatever they have been looking for in life isn t as pleasurable or as satisfying as they once assumed it would be.

The person undertaking this journey might also signify be seeking excitement in the unknown. The mountainous barren lands that he sets off to can also be symbols of facing new challenges. Their stark emptiness seem to indicate that they are waiting for one to come and shape the. The journey that is taken can be done in the guise of trying out new things that have the potential to help one grow both mentally as well as spiritually.

It also shows the willingness to detach oneself from others so that one can work on self-improvement, self-understanding and growth.

The Eight of Cups signifies time for change or transition, by means of walking away from something. Just like a caterpillar has to die before transforming into a beautiful butterfly, we all need to transform ourselves in our lives from time to time. This is the case especially after being tired of living what was the day to day, and embarking on a journey that will help one have a deeper understanding about life in general.


Eight of Cups how someone sees you

Eight of Cups as how someone sees you

- as walking away from something unfulfilling or disappointing to look for something bigger and better;
- they simply see them as someone who gives up and goes away when things get tough;
- He sees you as someone who doesn't take no crap. If they are not getting what they feel they need then they will drop that situation or person and try to never look back.

Getting the reversed Eight of Cups can show that one is in a state of confusion about which path they are supposed to take. The confusion usually arises from not knowing what is best for you and in the end, drifting in a sea of uncertainty is going to be the resulting effect.

One is likely to find themselves being aimless and not having clear cut goals in their lives. And in the end, they almost always end up following wherever the waves of life take them.
On the other hand, you may be aware of what you need to do. There is something that in your life that has for a long time stopped bringing you joy or pleasure, and though your soul's desire is to fly away from it, you find yourself remaining. The thought of leaving the security of what you have built fills you with fear - you are scared of both change and of losing something that has given you great comfort.

Most people usually find themselves stuck in limbo because they are stuck between two important decisions. For instance, one might want to change and work on themselves for the better, and at the same time, they may not in a position to make the necessary sacrifices that are necessary in order to achieve. We must have courage, to believe that we deserve better, that there are even more joyous things that are awaiting us if we take this journey.

You are going to experience something completely new, travelling great distances either in thought or location. There are big changes coming.

Cards combinations of Eight of Cups

All Eight of Cups combinations