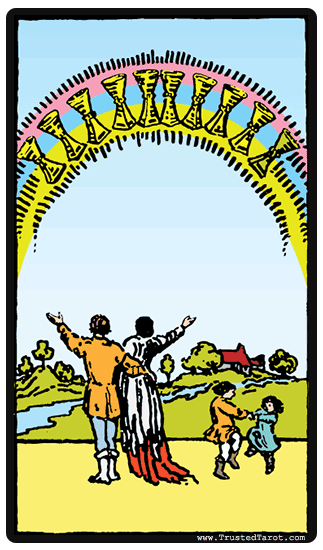 Arcan: Low
Timing: important event when intuition and emotions are turned into action. This event may occur in the next weeks or months to come.
Element: Water, female, passive energy - emotions

On the Ten of Cups, there is a couple holding each other while facing a beautiful house and a green garden. Beside them, there are two children playing joyously. The couple is seen holding each other in a loving and romantic embrace, while the children are freely playing. The couple seems to be in a stable relationship, while also blessed with the abundance of a comfortable home and beautiful children. The green land signifies fertility, and the river shows how freely the feelings of the couple are flowing, meaning that their relationship is quite peaceful. Above in the sky, there are ten cups, shaped in an arc, which are meant to symbolize blessings from heaven. The rainbow behind them shows the end of hard times and sorrows, and a new happy life where each and every one of the family will enjoy. The Ten of Cups card depicts ‘having it all .


Ten of Cups how someone sees you

Ten of Cups as how someone sees you

- people see you as a person whom they feel comfortable with;
- they are just relieved that the storms are over;
- In romance they can see you as family or someone they would build a family with;
- This card is similar to the 10 of pentacles when it speaks of permanence in ones life. But 10 of cups says that everything is whole and good. Someone may see you as bubbly, upbeat, and wholesome. I often get this card for my sis and brother in law.

When the Ten of Cups is reversed, the strong bonds that one forges with family and community are broken, or twisted. The Ten of Cups is truly the most 'happily ever after' card, but somehow this idealized image of domestic peace and comfort is broken, or was unrealistic all along. Instead of connections, you may find distance. Instead of coming together, you may be pulling apart.
Your hopes for happy times and special moments seem to not meet your expectations. You should learn to treat each other well, love each other and care for each other. This is the best way to ensure that you retain your harmonious living.

By taking confidence in your direction and following your deepest convictions, you have been propelled forward. This commitment and your comfort with authority have allowed room for recognition and success to manifest in your life.

A new undertaking is about to begin for you. This task, event, or journey will bring about the beginning of a long lasting friendship. Do not miss this opportunity.

The potential for financial success may present itself through some aspect of property ownership. Either find domestic happiness or gain prestige in public work. Despite the difficulty, balancing both at once is possible.

The potential for financial success may present itself through some aspect of property ownership. Either find domestic happiness or gain prestige in public work. Despite the difficulty, balancing both at once is possible.

Cards combinations of Ten of Cups

All Ten of Cups combinations