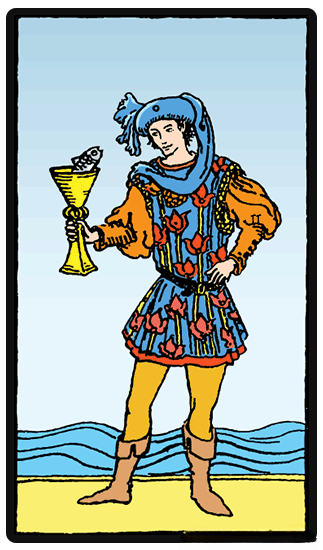 The Page of Cups represents the unexpected inspiration that comes to us from the unconscious, perhaps in ways that we may not truly understand. In this card, a youth at the seashore wears a blue tunic adorned with floral prints, and holds a golden cup. She also wears a beret that looks quite bohemian, and a long flowing scarf. She is surprised by a fish that pops out of the cup, as if to greet her from a fairytale. She can neither drink nor toast with the cup as the fish stares at her and seemingly tries to engage with her.

One of the most important meanings within the Page of Cups is that you should be open to new ideas, especially ones that stem from intuitive inspiration. The card seems to state that such inspiration should be embraced, despite it being something that you may not expect. It could lead you to adventure and open many doors. If it is a calling of a creative nature, for example, one to get into music or art, there's an especially strong push from this card to go for it.


Page of Cups how someone sees you

Page of Cups as how someone sees you

- the person in question, recognizes the potential re: the situation being inquired into;
- facing something new and unique, something unlike anything you have ever faced before.

One Page of Cups reversal meaning is that you are undergoing a block in your creativity. There are things or projects that you find interesting, but you seem to do them for other reasons than for the joy of it. You may be doing them for money, for fame, or something else. A reversed Page of Cups could indicate that you should remember the joy that your projects brought you in the first place to reclaim your imaginative spirit.

Another Page of Cups reversal meaning is that it can symbolize a troubled person. One who is afraid of reality whether it s emotional, financial, illness or something else. They find these issues difficult to face, perhaps leading to abuse of alcohol or drugs to escape. It could be an image of you or a loved one who is struggling with self-acceptance.

The Page of Cups could indicate that someone lacks inspiration, they are battling low self-worth, and they are easily depressed. What can you do to help inspire them to be their best self?

There is an idea you have already had that can be developed further for greater results. Your awareness of the obstacles before you will lead you to an understanding of the best ways around them.

Good news will reach you and remind you of the importance of a fresh outlook on life. See the humour in life and remember the healing power of laughter.

Cards combinations of Page of Cups

Hermit and Page of Cups

All Page of Cups combinations