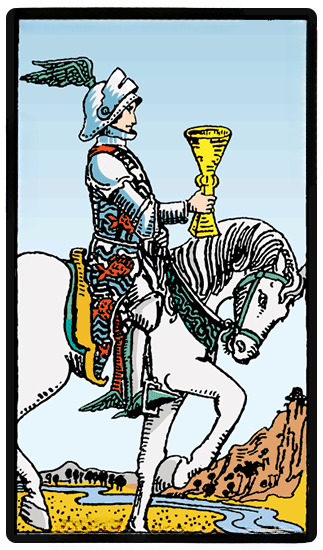 The Knight of Cups is a card which depicts a young knight who is gloriously riding a white horse while at the same time holding a cup as if he is a messenger of a certain sort. Unlike the Knight of Wands or the Knight of Swords, this particular one isn t charging along with his horse. He is instead moving slowly forward which provides the entire setting an overall impression of peace and calmness. The horse is known to represent one's drive, energy, and power. The horse's color is white, which is a well-known symbol of spirituality, light, and purity.

The truth is that the Knight of Cups is the most feminine amongst all the Knight cards in the tarot. It's important to note though, that this doesn t even slightly suggest that he is any less of a worthy knight. It implies that he is in proper touch with his emotions and his intuition, and that he uses them for his own well-being and during his many romance and seduction quests. He is usually quite attractive and charming to others, regardless of their gender.


Knight of Cups how someone sees you

Knight of Cups as how someone sees you

- force and swiftness;
- hasn't totally manifested yet, probably will, but caution is advised, since it does have an element of immaturity;
- serial monogamist;
- could have a crush on you but be too shy to show those feelings to you.

Now that you are aware of the upright Knight of Cups meaning let s take a look at what the card says when it is upside down. Reversed, the Knight of Cups means that you allow your emotions to control your life a lot more than you should. You might be overly jealous, emotional or moody. In fact, this could get up to the point of actual incapacity to take action, which is most definitely to be avoided. Jumping to conclusions too fast is characteristic of a reversed Knight of Cups, and making judgements without having the necessary information is very common.

The card indicates a situation which could be considered appealing at first but quickly turns out to be something very different. With such high expectations, everyone will walk away quite disappointed.

Your strengths have been your intellectual capacity and self-determined will power. Being caught slightly off-guard by the new directions and ideas of others is natural to your unique perspective.

An important offer or invitation will arrive suddenly and unexpectedly.

Staying focused and following your most passionate beliefs will lead to progress towards your goals. You will find peace in deep, meaningful connections with others.

The Knight of Cups is a romantic and compassionate dreamer bringing along new opportunities or some sort of positive invitation. He represents self acceptance and an arrival to finding the proper path for your life. The answer you are looking for is yes.

Cards combinations of Knight of Cups

All Knight of Cups combinations