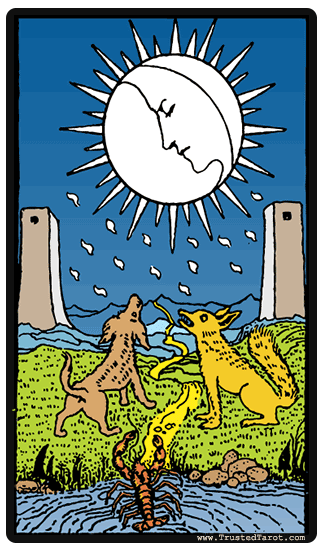 When we encounter the Moon, we see a path that leads off into the distance. On either side of the path stand a wolf and a dog, representing our animalistic nature - one is civilized, and the other wild and feral. There is a crawfish that is crawling out of the pond from which the path stems from. In the distance, we can see two towers flanking the central path, once again alluding to the doubles visible in this card. Everything in this card seems to echo the other, as if to allude to two possibilities. When we walk down the path, we walk the fine line between conscious and unconscious, between the tamed side of civilization of the dog, and the forces of nature represented by the wolf.
The towers on the opposing ends represent the forces of good and evil, and their similarity in appearance can allude to the difficulties that we face in distinguishing between them.

Another reading of the Moon card is the existence of illusion. Some hidden truth must be discovered, for what you are seeing now may just be a trick of the light. You must search for the hidden forces that must be unraveled.


Moon how someone sees you

Moon as how someone sees you

- he sees her as something of a mystery (since it's a new relationship), that he has romantic fantasies but no idea what the reality might be;
- the moon is about not seeing things in clear daylight, ie either wanting to 'ignore' certain areas, either consciously or unconsciously. It is a bit romantic card though as well, only wanting to see just the positive sides of a story can be deceptive though as well. I'd say, it is rather typical to get it at the beginning of a relationship.

A Moon reversal in a reading can sometimes indicate that the darker and more negative aspects of the moon are present in your life. It could represent confusion and unhappiness - you want to make progress, but you are not sure what is the right thing to do. You must deal with your anxiety and fears by overcoming them, for they are like shadows in the dark. It is time to believe in yourself and move forward.

The moon reversal meaning indicates that you are in an intuitive period or you have recently battled confusion, anxiety, and self-deception. It could be that you are misinterpreting how you have been feeling however you are starting to improve on this.

Another reversed moon meaning is that the forces of the night that are bringing you confusion are starting to dissipate. You have started managing your fears and anxiety. Whatever negative energies you have been facing are slowly fading away. It presents a liberating experience as you discover the positive side of things.

Your understanding of a past event may be distorted by your current perceptions. Reflect on your history and make sure the pieces fit together. By eliminating uncertainty, you will find more peace.

There is a challenge approaching, taking the form of either a new creative project or a conflict in a relationship. Your history will reveal the best course of action.