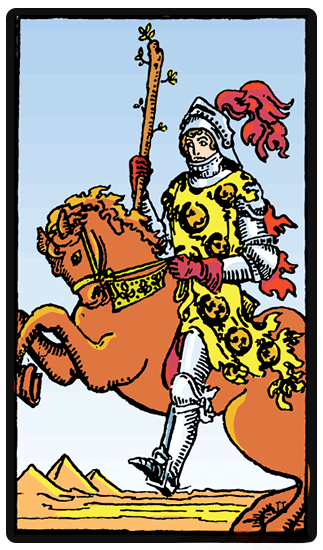 The Knight of Wands is seen on his horse that is reared up and ready for action. Judging from the knight s clothes and armor, as well as his horse, he is prepared for what s ahead. He is wearing a yellow patterned shirt on top of his metal armor. He is also wearing an armor helmet with red plume sticking out of it. He seems to be ready for battle, except he is holding a large wand instead of a sword. His horse is orange in color and has a mane that looks like flames. When you look at the Knight of Wands' face, you ll see the determination of wanting to be successful in his endeavor. Fire is a dominate factor in the Knight of Wands' symbolism. The decorative tassels hanging from his arms and back, as well as the horse s mane, are all in the color of flame. He is also wearing a yellow shirt printed with the fiery salamander symbol.

The Knight of Wands' symbolism is straightforward. When it appears, it means a great time to get away and travel. The person should feel charged up and full of life. One is also ready to get things done. He is adventurous and can find fun things to do no matter where he is. There is never a dull moment when the Knight of Wands is around. When the Knight of Wands shows up in a reading it seems to suggest that the seeker wants to complete important tasks. One wants to impress others with one s knowledge and skill. The card also shows up when the person is planning to move to another place of residence.


Knight of Wands how someone sees you

Knight of Wands as how someone sees you

The root of your recent desires for change is your curiousity and intuition. The conflicts you have faced at work have influenced the outcome of events around you.

A spontaneous decision will lead you to make a long journey or a permanent relocation. Your desire will be achieved in an unexpected way.

Cards combinations of Knight of Wands

All Knight of Wands combinations