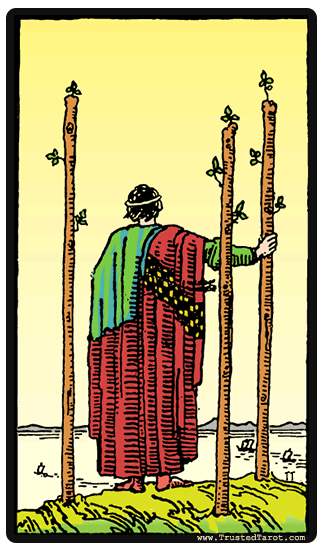 The Three of Wands depicts a man who is standing on the edge of a cliff, looking over the ocean and the mountains. From the cliff edge, he sees everything that is ahead of him. The Wands are planted into the ground and surround the man as he grasps one in his hand. He seems to look forward and reflect on both the commitment that he has for his plans, as well as the method of execution in order to bring them to reality.

The meaning of the Three of Wands hints that you are planning or going to plan for the future with more conviction. This could mean that everything around your plans is going smoothly, as you have taken the time to plan your future, and are taking steps to turn plans into action. It hints that you are perhaps creating a stable foundation for yourself.

The last Three of Wands meaning is that of travel in search of what you are seeking. There is a sense of leaving home, a voyage that must be undertaken. Great things do not happen to those that simply wait for them, you must expand. For most readings, this shows that you may travel to a new land over the water and that you may find an opportunity during your travels.


Three of Wands how someone sees you

Three of Wands as how someone sees you

- In the 3 of Wands, the ships are coming back to port. This leads me to wonder if you leave him in hopes that by leaving, you're going to make him change in ways that you want him to change. You always came back, though, without him changing enough, so for one thing, that caused him to believe you'll never leave for good. You'll always come back. But more importantly, this time he may just be tired of the "go away/come here" game and doesn't want to play anymore. And there are three ships coming back into the harbor. This may mean he's developed an interest in someone else this time.

The reversed Three of Wands indicates that you may have been embarking on personal journeys or developments, but you have not received the achievements that you were hoping for. This could be due to delays or road blocks. Despite all this, the card reminds you that all of your work has not been for nothing, but rather that it has helped you with your personal strength and fortitude.

The Three of Wands reversed can also mean you need to take some time to plan your future. This is especially true if you have not started on your long term goals or have become overwhelmed by the tasks that you face now, or will have to face soon. You are only reacting and not acting with thought and deliberation.

However, the most common Three of Wands reversed meaning is a nudge to include planning for future changes, and to watch for better options in case that they show up. The figure on the Three of Wands knows this and always keeps his eyes open for how the future could change, and it is a worthy lesson to learn.

Your efforts have established a foundation for your success. Maintain your resourcefulness and keep efficiency at the heart of your drive forward.

An offer for help may bring about a new project or idea, so do not delay in accepting it. The opportunity to interact with someone with greater resources than you will lead to long-term success.

The work ahead of you will pose an intellectual or mental challenge. In order to succeed, you must be able to think creatively or invent a path forward.

The Three of Wands stands for fresh starts, achievements, and positive partnerships. It could mean some sort of business expansion, or it could be the confirmation that you are on the right path toward success. It has an overall positive tone, and the answer it provides you with is yes.

Cards combinations of Three of Wands

All Three of Wands combinations