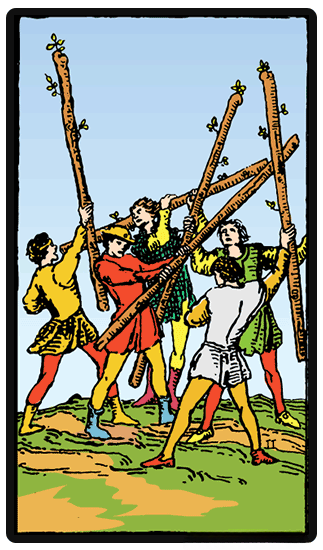 The Five of Wands depicts five men all holding their own wands and brandishing them up in the air. Like with most fives in the tarot, it is about some kind of disagreement that is facing the querent. This disagreement can either be taken to be as a sign of conflict between the men, or that all of them are simply enjoying the adrenaline rush of this conflict, and that the competition amongst them is of a good natured rivalry, not anger. The relaxed way in which they seem to be holding their wands gives a sense that this argument may be one of show rather than a fierce one.

From the image on the card, the symbolism in the Five of Wands suggests that there is form of conflict in one s life. This may be an existing conflict or one that is brewing and may eventually blow up in one's face. It may also depict a problem in communication, for example in a situation where no one really wants to listen to the other - meaning that no agreement or understanding takes place. The five men may signify problems in a group of people who are not patient enough to listen to what anyone else is saying. They only want to be heard, and since none of the others will listen, they all argue at once.
Much of this can be solved by the querent taking the first step to try and initiate communication in such a way that you suggest that everyone airs out what they have to say, one at a time. By doing this, you will be able to address the problem, and everyone will be heard. Meaning they ll all be satisfied.


Five of Wands how someone sees you

Five of Wands as how someone sees you

- he/she sees you as a "trouble" or a possible one. He/she has a girlfriend/boyfriend and because of your flirting/politeness, he/she thinks you looking to cause some trouble in his relationship;
- in relationship readings means manufacturing chaos or drama;

The Five of Wands reversed meaning can be that your natural method of dealing with disagreements is avoiding any kind of conflict by getting away from that place as fast as you can. Sometimes this can be regarded as a good thing, but other times, it may lead to a number of issues that are brewing up within you, for which you will have to address soon. On the other hand, it can also mean that you have worked through your troubles and that you do not have any more issues to worry about.

The battles you have faced has led you to boldness of character. This is a valuable trait, but only in moderation. Facing adversity requires tact, and it may feel as though your progress is too far delayed by the obstacles in your path.

A miscommunication or misunderstanding will pose obstacles to your progress.

Cards combinations of Five of Wands

All Five of Wands combinations