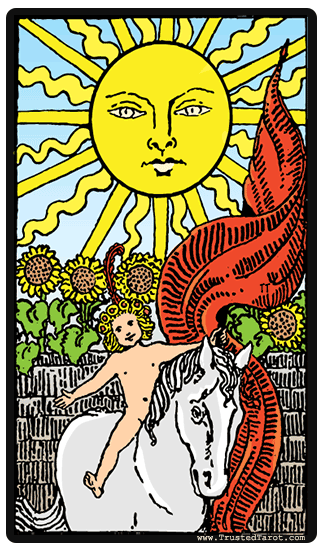 The Sun card presents an feeling of optimism and fulfillment. This card represents the dawn which follows the darkest of nights. The Sun is the source of all the life on our planet, and it represents life energy itself. There is a child depicted in the card, playing joyfully in the foreground. A symbol of our innocence, it represents the happiness that occurs when you are in alignment with your true self. The child is naked, meaning that he has absolutely nothing to hide. The card also depicts the childhood innocence and absolute purity. This is particularly emphasized through the white horse upon which the child is riding. The horse here is also a symbol of strength and nobility.

The Sun card represents success, abundance, and radiance. Like the sun itself, it gives strength and vitality to all those that are lucky enough to feel its rays. There is much joy and happiness that is coming to you.


Sun how someone sees you

Sun as how someone sees you

Optimistic. Strong. Unlikely to give up. Extrovert - pushy. Active.

In the reversed position, the Sun indicates that you might have significant difficulties finding positive aspects to certain situations. The clouds might be blocking out the warmth and light that you need to progress. This might be preventing you from feeling confident and powerful. You may experience certain setbacks which are damaging your optimism and enthusiasm.

On the other hand, the Sun reversed might be indicative that you are being unrealistic. It might be a sign that you have an overly optimistic perception of certain situations. These are things that you need to take into account in order to ensure that you are on the right track and your successes continue as they do.

The successes you have achieved in the past will set the stage for future joys. Continue developing your line of work or field of study and the rewards will come.

There is an opportunity for new friendship or a relationship that will lead to happiness and contentment. Do not give up and you will be led to success.

You are approaching a moment that has the potential to change your life. Take full advantage of this time and you will achieve a future of endless possibility.

The Sun, being the opposition to the Moon, is a card full of life, joy, and energy. It reveals positive achievements, successful endeavors, and an overall manifestations of good fortune in your life. Thus, the answer it provides for your question is yes.