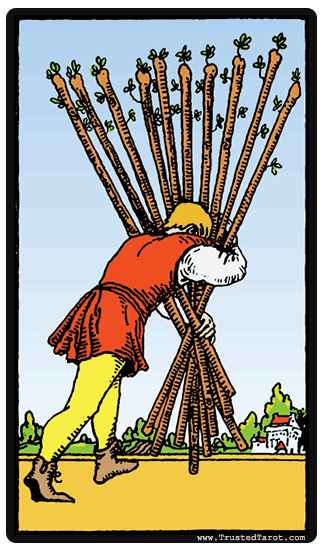 A man is shown carrying a heavy burden of wood, in the form of ten bundled wands, approaching a town which is not too far. This image on the ten of wands indicates a person who has already struggled in life and has succeeded, and he is now carrying the harvests to his final destination. Although he is not near the destination, it shows that he has finished the hardest part of life struggle and he just needs a place to relax and revel in his success.

This card shows that you have already completed the circle of struggle. After spending too many resources and lots of energy looking for success, you have finally overcome the obstacles. The sweat off your brow was worth it - your efforts have finally been rewarded. You may find yourself living in a world of abundance where poverty and suffering have no chance to intervene.


Ten of Wands how someone sees you

Ten of Wands as how someone sees you

Someone who does not delegate, has to do the work themselves, tend to be streesed, a hard worker. More or less agree with your assessment.

When the Ten of Wands card is reversed, it indicates that you are truly burdened by circumstances which are not necessary in your life. Look around and see what is bothering you that will not positively impact yourself even if you rectify it. Drop them all and be a free being that can think soberly and do things accurately. Anything that does not add value in your life is not worth your time, so let it go.

The strength that you've developed over years of struggle will lead you to the solution of your current problem. The negativity you have recently let go of will allow you to form a new philosophy.

Bear down and see the challenge through to the end. If you have been disconnected from someone close to you, expect an opportunity to reconnect.

By focusing your energy in one direction and consolidating your efforts, success will be easier to achieve. You will have the chance to achieve your desires, but you must first reach your lofty goals.

The Ten of Wands is a card highly associated with feeling an intense pressure and being over burdened in some area of your life. Other possible things suggested by this card are feelings of being trapped, opressed, or having no control over your circumstances. With an overall negative tone, the answer is no.

Cards combinations of Ten of Wands

All Ten of Wands combinations