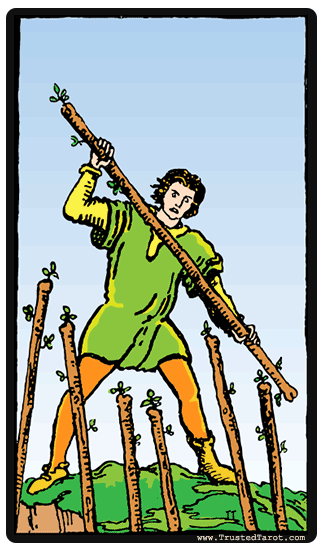 The Seven of Wands has an image of a man who is standing on a tall hill and being challenged by the opponents below. He seems to be defending this position and attacking in retaliation. It is interesting to note that in the Rider-Waite depiction of the Seven of Wands, the man is wearing not matching shoes. This is linked to the symbolism of being on uneven ground or not having a stable footing in life.

The Seven of Wands has a similar in meaning to the Five of Wands; both cards indicate struggles after the initial fulfillment and satisfaction of an event. The Seven of Wands however is different as it is is about the struggle that you need to go through to maintain your position, rather than to attain it. This is about the difficulties we face to continue to have success. You should be ready for the competition to you defend your title, and to prove yourself. Others are going to desire the same results that you do, so you need to stay ahead of the them.


Seven of Wands how someone sees you

Seven of Wands as how someone sees you

I'd said the person see you as someone who has a strong personality. You can fight for your opinions and your believes, and you have no fear of being different.With the 8 of pentacles it could mean you put a lot of efforts and energy to reach your goals when it's important to you. For the negative points, you could also be too narrow minded and defensive. Or you could be a little hot-tempered.

The Seven of Wands reversal meaning is that you could be feeling overwhelmed by all the responsibilities and challenges that you are facing. This can make it difficult to see the whole picture. You can also feel that you have to compete and compare yourself to other people, which leaves you feeling vulnerable and inadequate.

The Seven of Wands reversal meaning can also reflect your feelings of being criticized and judged constantly by others. Your friends and family could be questioning you about your decisions and choices, and you feel overwhelmed by their judgement.

Avoiding conflict and backing down is common with the reversed Seven of Wands. This can lead to unhappiness because you run away from activities and relinquish your goals, when you are challenged by anyone. Remember all that you fought for to be here, and think carefully on whether you truly believe that is worth giving up now. Another reading of the Seven of Wands reversed can also be that you are being too aggressive when you are protecting yourself and damaging your relationships by doing so.

Despite slow progress, your determination and sustained efforts will lead you steadily forward. Do not give up.

There is a great conflict approaching, but do not fear. Through courage, you will overcome this hurdle and experience a major change in your life as a result.

Cards combinations of Seven of Wands

All Seven of Wands combinations