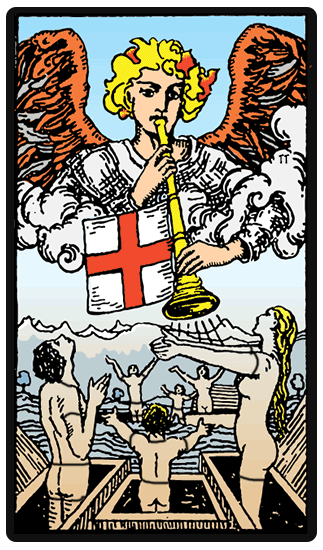 This card depicts what one would imagine the last judgment would be, in the various forms that takes in many mythologies. The image in the Judgement card shows women, men, and children who are rising from the grave to respond to Gabriel s trumpet call. Their outstretched arms symbolize that they are ready to be judged by the universe. They are about to meet their creator, their actions weighed, and find out where they will spend the remainder of eternity: in heaven or in hell. The massive tidal wave in the background signify that judgement is unavoidable, and that this judgement will be final.

Judgement is ruled by Pluto, who is the underworld s ruler. There are echoes of this card in Death, for they both remind us that everything comes to an end and that a new beginning is coming.


Judgement how someone sees you

Judgement as how someone sees you

- The person either is from their past (and judged them harshly, or changed their life) or they're not. They're not going to see you that way if you weren't part of their past, etc. (with one exception which we'll get to!). What they could see them as is a someone who will transform them, make them face their past and come to terms with it, etc. The one exception, by the way, is that they could see the person as someone they knew or recognize from a past life;
- see the other as judgemental;
- this person as someone who judged him quickly and harshly before.

The reversed Judgement card can mean that you doubt and judge yourself too harshly. This could be causing you to miss opportunities that were awaiting you. The lost momentum causes you to fall behind in your plans, which can make it difficult to move forward. This means that you should not be cautious, but you should be moving forward with pride and confidence.

Another reading of the Judgement reversal card can be a push to take time out of your busy routine to reflect upon your life to this point, and what you have learned so far. You are most likely not giving yourself the time or space to fully think about the matter and learn the lessons you need to to be able to progress with awareness. You could also be too critical of your past actions, so you are not giving yourself the forgiveness to move forward. The mistakes that we have made in the past are learning tools, so they help us move though life. Focusing too hard on these mistakes can cause us to trip and fall.

Your past is full of good work, but the process of your liberation from those experiences is ongoing. You are beginning a new chapter in your life.

The present has arrived and the past is relinquishing its hold on your fate. This is the best time to change an element of your lifestyle.

The fruits of your decisions are coming and you will receive that which you deserve. The path at your feet and the direction it is leading you are clear. You will see your ultimate desire through to the end.

The Judgement card is representative of some sort of change or transformation, likely one that has already occurred. It could mean the presence of a spiritual or professional calling and making decisions that will lead to your success. The answer to your question is yes.