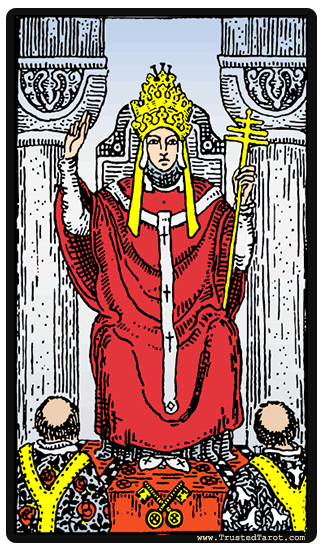 The card depicts a religious figure that sits in a rather formal environment characteristic for a church. He is wearing three elaborate vestments which are designated to represent the three different worlds. His right hand is properly raised in an act of benediction, a sign of blessing – it s the same hand that the Magician has raised. In his other hand, he carries a triple cross, which is associated traditionally with the pope. Each of the horizontal bars in the cross are thought to represent the Father, the Son and the Holy Ghost. Beneath him, two acolytes are seated, representing the transfer of sacred knowledge within institutions. Through these acolytes, the card also comes to represent following the path to knowledge and education.
This card is also known as the High Priest in certain decks - as well as the Pope. He is acting as the masculine counterpart of another card which is known as the High Priestess. This card is ruled by Taurus.


Hierophant how someone sees you

Hierophant as how someone sees you

- convention, an almost unsurmountable obstacle in my own personal experience and therefore somewhat discouraging;
- properly dressed and well-behaved.

When you see the Hierophant in reverse, it may mean that you are feeling particularly restricted and even constrained from too many structures and rules. As a result, you have lost quite a lot of control as well as flexibility in your life. You have a particularly strong will and desire to go ahead and regain control as well as to break free from the shackles of convention. You are tempted to try unorthodox approaches or to function in a way which defies social ties and norms.

The Hierophant reversal meaning is mostly about questioning certain traditions and making sure that whatever it is that you do is the right thing for you in this certain moment.

There is value in an ambition from your past. Look to a strength that you may have neglected.

The opportunity for work or study under a superior is approaching. If the others around you are capable of being wrong, so are you.