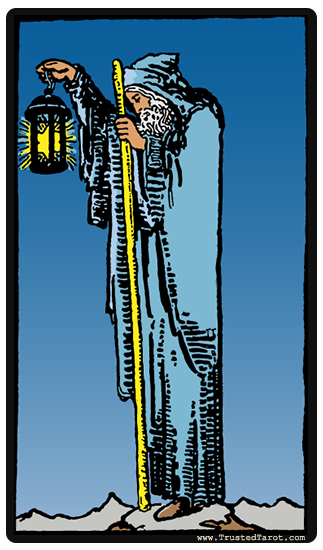 The Hermit depicts an old man standing alone at the peak of the mountain while holding a lantern in one of his hands and a staff on the other. The mountain denotes accomplishment, development, and success. The hermit tarot card refers to the level of spiritual knowledge that he attained, and that he is ready to impart that knowledge to everyone. There is also a deep commitment he has to his goal and a solid awareness of the path that he is taking. Inside the lantern, you will notice a star with 6 points which is also known as the Seal of Solomon. This symbol represents wisdom. The staff that he holds depicts authority and power.

The hermit's appearance in a reading can also denote the appearance of someone who will come to your life that will be your mentor.


Hermit how someone sees you

Hermit as how someone sees you

- that he feels deeply for her, his feelings shine brightly for all to see, and his feelings are probably very pure as well, untainted by selfish desires;
- The Hermit is looking for the alchemical egg. For romance it could mean that he is looking for something, a certain type of relationship or a certain type of woman and he either has found it with her and he is really happy to have finaly found her... or not, then she does not correspond to what he is looking for.

When reversed, you are perhaps in a situation where you'd like to be alone; there is nothing wrong about that. However, there is a possibility that your seclusion may become harmful to both yourself and others. Though the Hermit sets forwards with noble intentions to search for his inner truth, his path inward may also be filled with great danger. Going inward may lead to madness and the abyss, for the unconscious is filled with images that he may not yet understand, lurking and waiting to lure you ever inside. Like a man that gets lost in his own dreams, the hermit may find himself stuck in a world of his own, alone, trapped, unreal. You must learn to balance your need for truth with connection to your fellow human.
When it comes to work, the hermit reversal meaning refers to your preparedness to get to the bottom of something that has been troubling you for quite some time now. There is searching to be done, and it will be your responsibility to ask the question that will allow the other people to understand the circumstances.

The pace of your past has slowed, and it is time to accept this. Continue looking for your finals goals and consider the insight you have recently gained.

There is someone who can help you through all your problems, and their insight may surprise you. This person is yourself. By understanding yourself, you can better understand others.