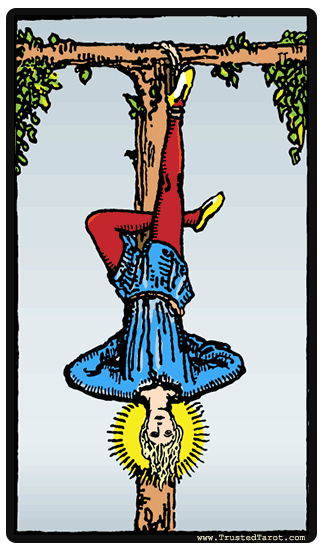 In this card, it depicts a man who is suspended upside-down, and he is hanging by his foot from the living world tree. This tree is rooted deep down in the underworld, and it is known to support the heavens. It is believed that the hanging man is actually positioned there by his own free will. We believe this because of the serene expression which is on his face. His right foot is bound to the branches, but his left foot remains perfectly free. At the same time, he is holding his hands behind his back in a way which forms an inverted triangle. His wearing of red pants are a representation of the physical body and human s passion, while the blue that he wears in his shirt are representative of calm emotions, a color combination that is commonly seen in saints. His intellect is symbolized by the yellow color of his shoes, hair and halo.


Hanged Man how someone sees you

Hanged Man as how someone sees you

- someone willing to sacrifice something or part of themselves for something better/greater. Can indicate them seeing person as willing to surrender perhaps;
- The Hanged Man signals, as you saw, a change in perspective, but it's usually accompanied by giving up some view strongly held before, thus opening yourself up to seeing things in a new way. The Hanged Man also indicates a time of suspension, so the message is not to press him or crowd him or keep asking how he's seeing you. For now, he's simply looking at you and re-thinking things. He's gaining a new perspective. Give him time to do that.

The reversal meaning of the Hanged Man card represents a very specific period of time during which you feel as if you are sacrificing a significant amount of time while getting nothing in return. You might have felt as if certain things are at a state of an absolute standstill without any particular resolution or movement. It s as if you are putting your entire effort and attention into something but nothing turns out as it should.

Letting go of some things from your past has brought new value to your spiritual life. That which you sacrificed must be seen in a new way.

If there is something being rushed, this may suggest that it is going to pause. Keep in mind that the act of giving help is not more important than the person being helped.

Many things are unknown to you now, so you must make new goals and plan carefully. Acting at the right moment will get you ahead.

The Hanged Man suggests some sort of metamorphosis through breaking patterns, letting go, or going through a period of transition. Although it could indicate having to give something up in order to gain a fresh perspective, it has neither positive or negative connotations. Maybe is the answer.