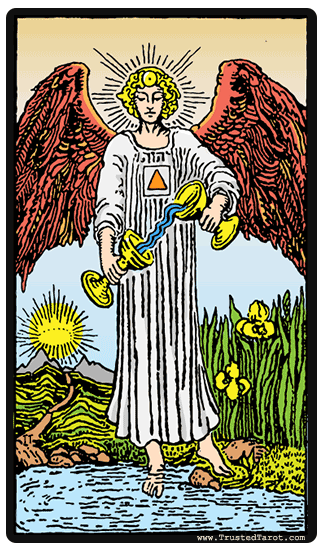 An androgynous angel is the first thing you see on the Rider-Waite Temperance card; the angel’s appearance suggests an equilibrium between the sexes. The angel’s robe is simple but in the centre of the cloth lies a bold orange triangle within a square; this shows the Earth’s connection to the holy trinity whilst the glow of the triangle feels welcoming yet instils a prospect of foreboding. The angel’s face is stoic and concentrated, completely focused on exchanging the waters of the two golden cups in their hands; the direction of the water is impossible to determine which symbolises the concept of infinity and union; it can also signify the flow of spiritual awareness we experience on a daily basis as we tune in and out with our higher self.

The angel stands above either a pond or river with one foot gently dipped in the water as the other stands on a patch of dry glass; this represents the duality between the subconscious and the conscious - between dreams and reality. Furthermore, the mountain range on the left contrasts with the meadow on the right symbolising universal experiences and individual tranquillity regardless of location or circumstance.

The illustration presents stability and balance, it brings a sense of serenity to the viewer; the composition of bright greens, yellows, whites and reds is uplifting and depicts the ideal union between opposites - the beauty and order that comes with duality. The background shows the dawn which resembles fresh beginnings and a pastel sky that further feeds into the atmosphere of concord. Everything is exactly where it’s supposed to be.

Temperance’s advice is to dip your toes into new waters, ideas, developments and try new things without directly diving into the depths head-first; smaller steps into new projects or milestones work out better than taking huge leaps only to become overwhelmed and quit when things become too hectic.
The Temperance card can also serve as a reminder; in times of tremendous stress it implores you to steady your nerves and keep calm, do not panic even if your situation feels dire; better days are coming.

When it comes to its meaning regarding personality (either your own or someone else’s) it suggests a level-headed person; someone who excels in the art of stoicism and is able to disregard meritless negative criticism and be unbothered by malicious people. This is a liberating trait and allows the individual at hand to explore life without worrying about public opinions, thus allowing them time and energy to explore new paths in life or to develop their skills in work, social or personal environments. Additionally, it can mean a person knows what they want and how to obtain it; this makes their creativity organised and they are able to achieve more than the average person if they dedicate enough time and patience to projects.

This card is renowned for representing patience, stability and regulation; if this card appears during a reading it could be a warning that you’re falling into extremes which could lead to disaster; you should remain grounded and avoid tunnel vision - try to comprehend the complete picture before skipping to conclusions.
Likewise, it indicates life experience is forthcoming; there are lessons here to be learned. If you’re going through a challenging time, Temperence promises you will come out of it wiser than before; it’s all part of life’s journey.

On a wider scale, this card indicates community union - there is peace and equanimity around you and in your social circles as you all work together for the greater good and your soothing presence helps ease their burdens. You are appreciated by those who love you.
Alternatively, it could suggest you need to take some time to re-evaluate your intentions and priorities in life; reflect on yourself; you might find necessary changes are required in your life you hadn’t considered before.


Temperance how someone sees you

Temperance as how someone sees you

Be wary if this card comes up during a love reading as a potential interpretation suggests obsession; if someone is romantically interested in you it signifies overly intense sentiments bordering on infatuation. Be direct and convey your feelings and concerns to this person, for there’s potential for their obsession to unhinge both their life and yours should it go unchecked.

Chaos, pressure, anxiety; those words best define Temperance’s reversed meaning. It means there is too little balance or too much desire for control; other cards in the spread will help reveal what exactly is causing this disparity. By itself, it serves as a warning that if you follow one particular path it will result in excess or extremes which will offset the balance and cause uncontrollable chaos; do not walk upon this darkened path for it’ll lead you into the jaws of catastrophe.
If you’re lacking plans for the future it can mean that you’re trapped in a personal plateau; taking it one day at a time can result in lopsided emotions and restlessness; you require goals to strive for to motivate yourself and to fall in love with life once more; speculate on what you need to work on and begin the essential steps to go on your personal journey. Without self-reflection or planning, you’ll be stuck, unable to grow. All good things must be enjoyed in moderation, greed breeds contempt.

You have led a harmonious life in the past; this taught you how to work well with others and this harmony is destined to repeat going forward. You have been influenced greatly by living in balance, it has changed you for the better.

Desires you’ve wished for will be yours at last; you have worked diligently to achieve your dreams. Expect an increase in wealth, advancement in schooling or careers, a healthy relationship or even marriage to occur in your life. This joy may spread to your immediate loved ones.

Be careful - practice moderation. Do not slip into indulgence. Future conflicts will be resolved if you keep a steady mind and think decisions through accordingly - a new chapter of your life is beginning.


Temperance yes or no

Temperance implies divine intervention and harmony. Its presence in your spread shows you possess great self-confidence and are in control of your own fate; the answer Temperance gives to your question is “most likely yes”.

Only registed users are able to comment
Get private tarot reading from our Professional tarot reader
Six of Wands
The Six of Wands tarot card depicts a man who is currently sporting a wreath of victory around his head. He is depicted riding a horse via a crowd of people who are cheering. The horse is white, that is a famous symbol of strength, purity in addition to success. The crowd is there to show the general public s popularity for the achievements of the person driving the horse. The wand that the person is carrying also has a wreath that's tied to it in an attempt to in addition emphasize his success. The man isn't afraid, or shy about all of this attention however alternatively proud along with his accomplishments. To this, the group round him reacts with cheerfulness and enthusiasm.
Read more
Emperor
In the Emperor tarot card, a stoic ruler determine can be seen on his throne, which is adorned with the heads of four rams, representing his astrological sign - Aries. In one hand, he includes a scepter, representing his reign and his proper to rule, and inside the different an orb, a image of the kingdom that he watches over. The lengthy beard of the emperor represents his big experience; over time he has found out much about what it takes to rule, to establish power, authority and entire order for the benefit of his people. Behind him, the barren mountains indicates his determination, his ambition for greater heights and his management capability. Contrast this with his complement, the Empress, whose flowing fields are full of nurturing kindness. The Emperor instead rules with grit, energy and force.
Read more
Death
Here, we see Death driving a lovely white horse whilst preserving up a black flag with a white pattern. It is portrayed as a dwelling skeleton, the bones being the only part of the human body current after death. He wears armor, which offers him his invincibility - signaling that no person can destroy Death. The white horse that he rides stands for purity, as Death purifies everyone. Beneath him, all classes of people lie inside the dirt - a king, and a pauper, intended to remind us that demise does no longer differentiate between class, race, gender.
Read more
Magician
The Magician is one tarot card that is filled with symbolism. The central determine depicts a person with one hand pointed to the sky, whilst the alternative hand factors to the ground, as though to say "as above, so below". This is a rather complicated phrase, however its summarization is that earth displays heaven, the outer international reflects within, the microcosm displays the macrocosm, earth reflects God. It can also be interpreted here that the magician symbolizes the capability to act as a go-among among the arena above and the contemporary, human global. On his table, the magician additionally wields all the fits of the tarot. This symbolizes the 4 elements being connected by using this magician - the four factors being earth, water, air, and fire. The infinity sign up his head indicates the infinite possibilities of creation with the will.
Read more
Nine of Pentacles
The Nine of Pentacles depicts a lady in the center of a vineyard. The lady wears what appears to be a long, high priced dress decorated with sunflowers. She seems to be part of a wealthy house, for inside the some distance background, we see a castle. A falcon is sitting peacefully and playfully on her left hand. The vines at the back of her are wealthy and full of grapes and golden coins, signaling that she has been very a hit in her ventures, which can be yielding a excellent and considerable harvest.
Read more