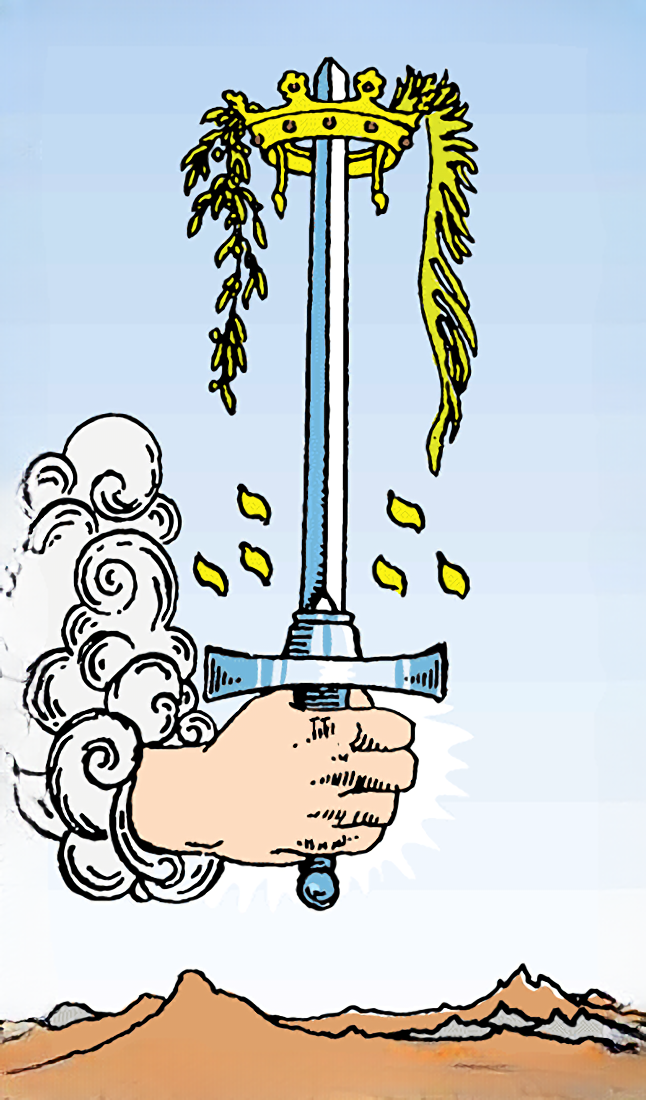 The Ace of Swords shows a hand emerging from the clouds wielding a double-edged sword. This double edged sword carries a golden crown encircled by a wreath. The wreath has for a long time, been associated with victory, achievement and great achievement.

The crown is used to symbolize royalty and the strength to rule that includes royalty.

In the background, we see mountains and the sea which can be interpreted to be symbols of great achievement, for example, the conquering of remote lands, propelled by ambition.

As with all the aces, the Ace of Swords indicates that one is about to revel in a moment of breakthrough. With its sharp blade representing the energy of the intellect, this sword has the capability to cut thrrough deception and find truth. In layman's terms, this card represents that moment in which it is easy to see the world from a new point of view, as a place that is full of nothing but new possibilities. It is, therefore, the excellent time to work for your goals. As with all the aces, this card is an indicator of waiting opportunities and new beginnings.

The Ace of Swords shows that one is ready to revel in a second of breakthrough.

It may additionally be a terrific time to seek justice and truth in all topics - your sense of right and wrong is clear, and your mind is swift. If you rise to the occasion, your sharpness and clarity in thought could be rewarded.

When we study the swords closely, and notice its double-edge, we are also reminded that this sword can be either used for noble deeds or to deal destruction. It all depends on the wielder, and is a warning too that immoderate power holds the danger to corrupt. If you stay with principles, the sword will serve you well.


Ace of Swords how someone sees you

Ace of Swords as how someone sees you

- Ace is always good in relationship. It means a new beginning with a lot of communication.

Another interpretation might be that others see you as the Ace of Swords - an intellectual/scholarly person - or possibly as someone who loves to think from a place of logic and knowledge, using their intelligence to guide their decisions. They look at you and see you as someone who is well read, and uses facts and rational concepts to make decisions. Perhaps they feel they would be challenged in new ways or would learn a great deal from you.

On the other hand, they may see you as more of an intellectual that they would like to connect with from a mental level and not romantically. Someone who wants to be challenged and emotionally and intellectually connected could certainly feel like the "Ace of Swords".

Hades and Persephone. He rose up in his chariot to bring her down to the underworld, they loved each other, and he is the god of the minerals that are used to make swords.

Getting a reversed Ace of Swords might mean that one's thoughts are confused, unsure and very chaotic. This isn't a good time to make any decisions as you currently lack clarity on the situation at hand - the chances of failure can be pretty high.

At this time, it would be better to prepare yourself and take baby steps - work methodically as you slowly move towards achieving your goals. This would be a good time to lay back and rationally think your way through each stage rather than acting on impulse, since everything appears in a blur and is not very clear at that moment. It might also be a good time to seek advice since things may not be as they seem.

You have fought in the name of good, adding your intense energy to an idealistic cause. The events of the recent past have set unchangeable events in motion.

You are entering a new phase of your life and everything is going to change. The causes and results of the change are not certain, but this period will reveal many things to you.


Ace of Swords yes or no

The Ace of Swords represents victory through having mental strength and achievement. Justice, clarity, and creative thinking are all associated with this card. A brilliant idea could be just around the corner, or perhaps it is some sort of divine inspiration toward creativity. The answer is likely yes.

Cards combinations of Ace of Swords

All Ace of Swords combinations

Only registed users are able to comment
Ace of Swords
The Ace of Swords shows a hand emerging from the clouds wielding a double-edged sword. This double edged sword carries a golden crown encircled by a wreath. The wreath has for a long time, been associated with victory, achievement and great achievement. The crown is used to symbolize royalty and the strength to rule that includes royalty. In the background, we see mountains and the sea which can be interpreted to be symbols of great achievement, for example, the conquering of remote lands, propelled by ambition.
Read more
Knight of Wands
The Knight of Wands is seen on his horse this is reared up and ready for action. Judging from the knight s garments and armor, in addition to his horse, he is prepared for what s ahead. He is sporting a yellow patterned shirt on pinnacle of his steel armor. He is also sporting an armor helmet with red plume protruding of it. He appears to be ready for battle, except he is maintaining a massive wand as opposed to a sword. His horse is orange in colour and has a mane that looks as if flames. When you observe the Knight of Wands' face, you ll see the dedication of wanting to achieve success in his endeavor. Fire is a dominate factor within the Knight of Wands' symbolism. The ornamental tassels hanging from his fingers and back, in addition to the pony s mane, are all inside the shade of flame. He is also wearing a yellow blouse published with the fiery salamander symbol.
Read more
Ace of Pentacles
In this card, there is a mysterious hand that appears from the clouds holding a gold coin with a pentagram engraved on its surface. This pentacle is associated with the element of earth, representing wealth and all things material and earthly. Below the hand is a garden which seems to be flourishing with flowers and other kinds of vegetation, giving the impression of fertility, growth and prosperity. The mountain represents the ambition required to force one's search for the pentacle. The flowing creek seems to suggest that emotions are flowing toward this ambition.
Read more
Devil
This card indicates the Devil represented in his most well-known satyr shape, in any other case recognised as Baphomet. Along with being half goat and half of man, the devil has bat wings and an inverted pentagram on his forehead. He is standing on a pedestal, to that are chained a nude man and female, as if to expose that he has dominion over them. Both the man and the lady have horns, as if to reveal that the extra time they spend with the Devil, the much less human they become. The chains make it appear as though the satan has taken them captive. The man has a flame on his tail while a girl has a bowl of grapes on her tail, which symbolizes their dependancy to electricity and finer matters in life, respectively. Looking closely, both the person and the woman don t look happy. Their person power has been taken from them, leaving them uncovered and ashamed in their nakedness.
Read more
Nine of Cups
In this card, a middle-elderly man is sitting on a wood bench whilst his fingers are crossed, and his face are showing pretty a stage of contentment. He is dressed elegantly and has the appearance of the true satisfaction. The head-get dressed on his head is red, and is a depiction of his active mind. At his background, you will observe there are nine golden cups, based and organized in an orderly manner. The Nine of Cups symbolizes a illustration of success and fulfillment, each spiritually and materially. The man shows that expression of success after accomplishing his innermost desire.
Read more