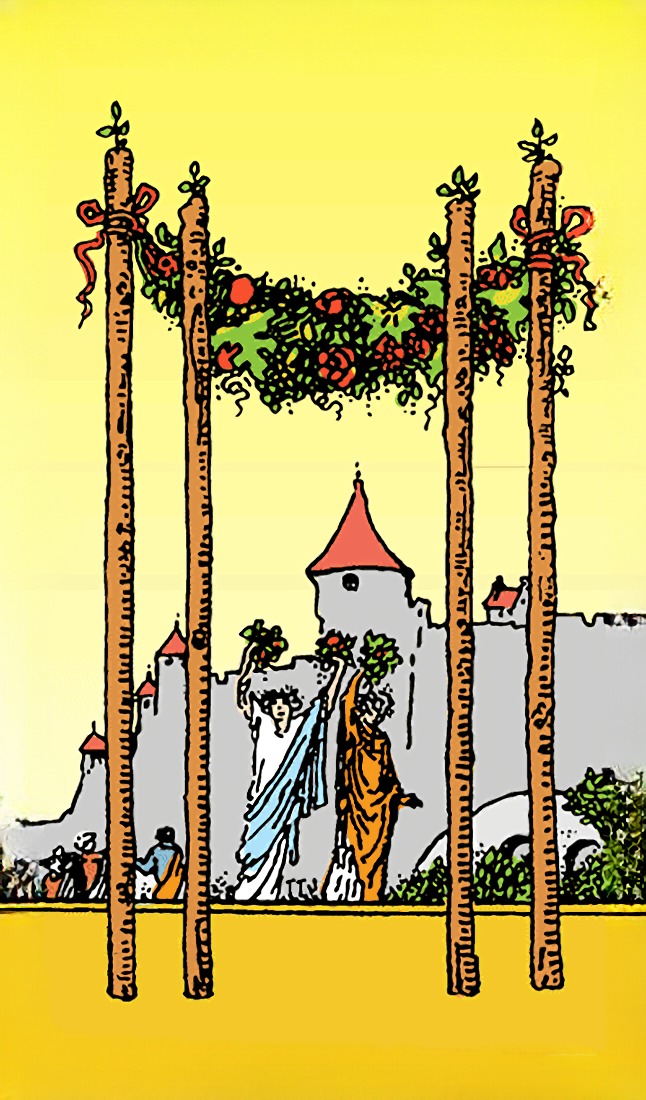 The Four of Wands is a passionate card, abundant with fiery energy. The Rider-Waite Tarot deck depicts the card with a stunning illustration of a duo - presumably lovers - adorned in classical robes dancing merrily beneath a floral welcome wreath composed of four poles, representing the four wands of the card. The ceremonial aspects of this card are evident, it overflows with positive energy. The castle structure in the background symbolises a sense of majesty and awe, with the duo holding flowers up to the skies, a metaphor for accomplishment and praise of the divine. Potential views of the scene are of a matrimonial union or marriage, a welcoming ceremony or a religious rite, though the most common speculation is that it represents a Jewish Wedding Chuppah or Samaritan Jewish Sukkah used for harvest festivals. The wands stand straight without the need for support, this symbolises emotional stability.

Waite, one of the Rider-Waite Deck’s creators, has stated that the card was drawn with the homestead in mind; country life, specifically. Its common meaning equates to comfort and harmony, a blissful life devoid of troubles. When the Four of Wands shows up during a tarot reading it usually means that now is the ideal time for you to count your blessings and spend much-needed time with your loved ones, be they friends or family. Invite them over for a private dinner party or a daytime trip to the nearest landmark or destination, or simply set aside some time to spend with them. This card is telling you to enjoy the domestic comforts you’ve got in your life currently, especially if you are going through a difficult period in your life: it’s a reminder of the good that resides in every aspect of your life regardless of how bad things might appear, it implores you to check every grey cloud for a silver lining.
Alternatively, the Four of Wands suggests a special occasion or holiday is upcoming and that good news and prosperity is coming your way.
In the mystic craft of numerology the number four means ‘balance’ - it’s a sign of stability.
Combined with its numerology meaning, when it comes to personal projects and workload it is a sign of great fortune and implies you will soon be able to reap the fruits of your hard labour. A milestone of success is blossoming.
In terms of romance getting this card could mean amorous events are approaching, such as taking the next step in one’s relationship, like moving in or getting engaged (or even married), meeting a prospective lover or even forthcoming children. By all means, if you are doing a love reading, this type of card is a reason for optimism.
In summary, the card reflects that you have reasons for celebrations, whatever they may be.


Four of Wands how someone sees you

Four of Wands as how someone sees you

Well-balanced, you are exactly where you’re supposed to be. There is nothing lacking, you’re on the right path to success in most or all of your life’s endeavours.
You’ve obtained stability in life, be that in a relationship, sense of self or career; it gives you vital balance that helps keep you stable. Others can see this and view you as a grounded individual who doesn’t suffer from absent-mindedness.
You are ready for long-term commitments, perhaps you have struggled with them in the past or felt unready to dedicate your all to something (work, love, self-growth, etc) but now you have finally reached your point of metamorphosis; your time to move on to the “next step” has arrived. (Potential) lovers and dear friends can tell this impressive change in you and will want to be around you to bask in your newly-found sense of certainty and security.
Those you surround yourself with believe you enhance their lives for the better, you’re a positive influence on them and help uplift them in times of woe.

One of the largest misconceptions about tarot is that a reversed meaning always suggests the opposite outcome; in truth, while this can be the case quite often, there are times were a reversed card suggests there is either a lack of the upright meaning(s) or an excess of it.
In terms of the Four of Wands, the most common interpretation of the reversed card would be utter chaos, a total lack of harmony and a breakdown of the home-life. This could manifest in a multitude of ways from physical objects breaking in the homestead, to broken marriages and relationships, to friendship fallouts and work troubles. In some cases, it might suggest chaos within yourself and a decline in one’s health, be it physical or mental.
Getting the reversed Four of Wands suggests a lack of support, the tension between loved ones, losing things that hold metaphysical or emotional value to you or feeling unwelcome. During this time you might be feeling unsure about your interpersonal relationships with loved ones and might be questioning where you stand with them. Potentially, this card may serve as a warning that someone you care for is not to be trusted and may end up failing you in your time of need.
Furthermore, it could suggest a surplus of comfort to the point where you feel trapped (or someone close to you feels trapped) in luxuries, either financial or emotional. This might imply feelings of restlessness or flightiness in individuals, perhaps someone close to you (or even yourself) yearns for freedom and has thoughts of “escaping”, in any possible sense of that word. Even still, depending on personal interpretation, it could suggest there is not enough love or support, or that there is not enough effort being put into making a house a home.
The remedy to a reversed Four of Cards is nuanced according to each situation but commonly can be solved by either allowing yourself or a loved one more space to be themselves; by inducing communication between family and friends; and by listening to others about their desires when it comes to your relationship with them. If the issue lies with a workplace or school system the best solution for disorder is to speak to a supervisor, manager or professor about ways to go about your problems and ask them how you may improve - alternatively work on your personal work skills such as time management and organisation.

Your perseverance has resulted in success, you have a reason to feel content and satisfied with your achievements. The seeds you planted in the past and watered with consistent hard work have now grown into flowering plants of victory. You should analyse your past choices and note what you did correctly to get to this point and keep it in mind for future ambitions in order to form good habits and to allow yourself similar successes in the coming months or years.

Right now what’s most important is that you accept happiness and allow it room in your heart: spend time with your family and friends and let them be there for you during times of hardships; similarly ensure you’re there for them when they need you. Everything is beginning to fall into its rightful place and hard work is paying off, you’re going to succeed if you continue as you are now. No matter what the future holds, know that you have people in your life who love you and that you are not alone.

If you continue on the path you are on you will achieve your dreams and fulfil your ambitions, but don’t get too caught up in plans for what will be: remember to enjoy the present and that choices made now will affect what will happen later. Contentment, good fortune and success are all steadily flowing to you on a river of prosperity.


Four of Wands yes or no

Although Tarot is primarily used for detailed divination it can be used for yes/no answers though many lack the knowledge of this fact. The Four of Wands answers “yes” to your question as it symbolises positivity, harmony, goodness and the joy that comes with new beginnings.

Cards combinations of Four of Wands

All Four of Wands combinations

Only registed users are able to comment
Get private tarot reading from our Professional tarot reader
Nine of Wands
The Nine of Wands shows a weak-searching man holding directly to a wand with 8 other upright wands standing behind them. The man appears injured, however he still seems geared up to combat any other battle, and goals strongly to win. He has a glance of desire and resolution approximately him that must help him undergo that one last battle. It is a card that indicates a mixture of challenges, hope and triumph.
Read more
Wheel of Fortune
The Wheel of Fortune is one in all the maximum highly symbolic cards inside the deck, stuffed with symptoms that each have its personal meaning. At the center of the card, lies a giant wheel, protected in esoteric symbols. There are extraordinary creatures that surround the wheel; the angel, the eagle, the bull and the lion. They are related to 4 fixed symptoms within the zodiac - leo, taurus, scorpio and aquarius. These four animals also are representatives for the 4 evangelists in Christian traditions, which is perhaps the cause that they are all adorned with wings. The books that every of the creatures hold represents the Torah which communicates awareness and self-understanding. The snake shows the act of descending into fabric world. On the wheel itself, rides a sphinx that sits at the pinnacle, and what seems to be both a devil, or Anubis himself bobbing up at the bottom. These two Egyptian figures are consultant of both the knowledge of the gods and kings (in the case of the sphinx) and the underworld (Anubis). They are rotating forever, in a cycle, and suggests that as one comes up, the other goes down.
Read more
Eight of Pentacles
The Eight of Pentacles card depicts a younger man who is etching a pentacle form into the 8 golden coins. The card symbolizes someone who is completely targeted and absorbed in what they are doing. The town that is far in the background means that he correctly remoted himself from the distractions so that he can fully deal with his undertaking. The Eight of Pentacles refers to that moments to your life when you are dedicated to finishing a certain challenge. You are fully-immersed, and also you are devoted in handing over the high-quality version of your work.
Read more
Three of Wands
The Three of Wands depicts a man who is status on the brink of a cliff, looking over the sea and the mountains. From the cliff edge, he sees the whole thing that is ahead of him. The Wands are planted into the ground and surround the person as he grasps one in his hand. He seems to appearance forward and mirror on each the commitment that he has for his plans, as well as the technique of execution so that you can carry them to reality.
Read more
Two of Cups
This card indicates an image of a person and a lady that are exchanging their cups in a ceremony. There is the symbol of Hermes caduceus in between which is regularly associated to negotiation, trade, cosmic electricity, protection, right conduct, and duality. The Two of Cups refers to something quite positive, for it is one in all the maximum auspicious cards within the tarot for relationships, whether or not romantic, business or otherwise. It shows a brand new partnership is within the works, and it'll be created with balance, recognize, and honor. Above the caduceus is a chimera, which symbolizes fire and ardour additionally governs this partnership.
Read more