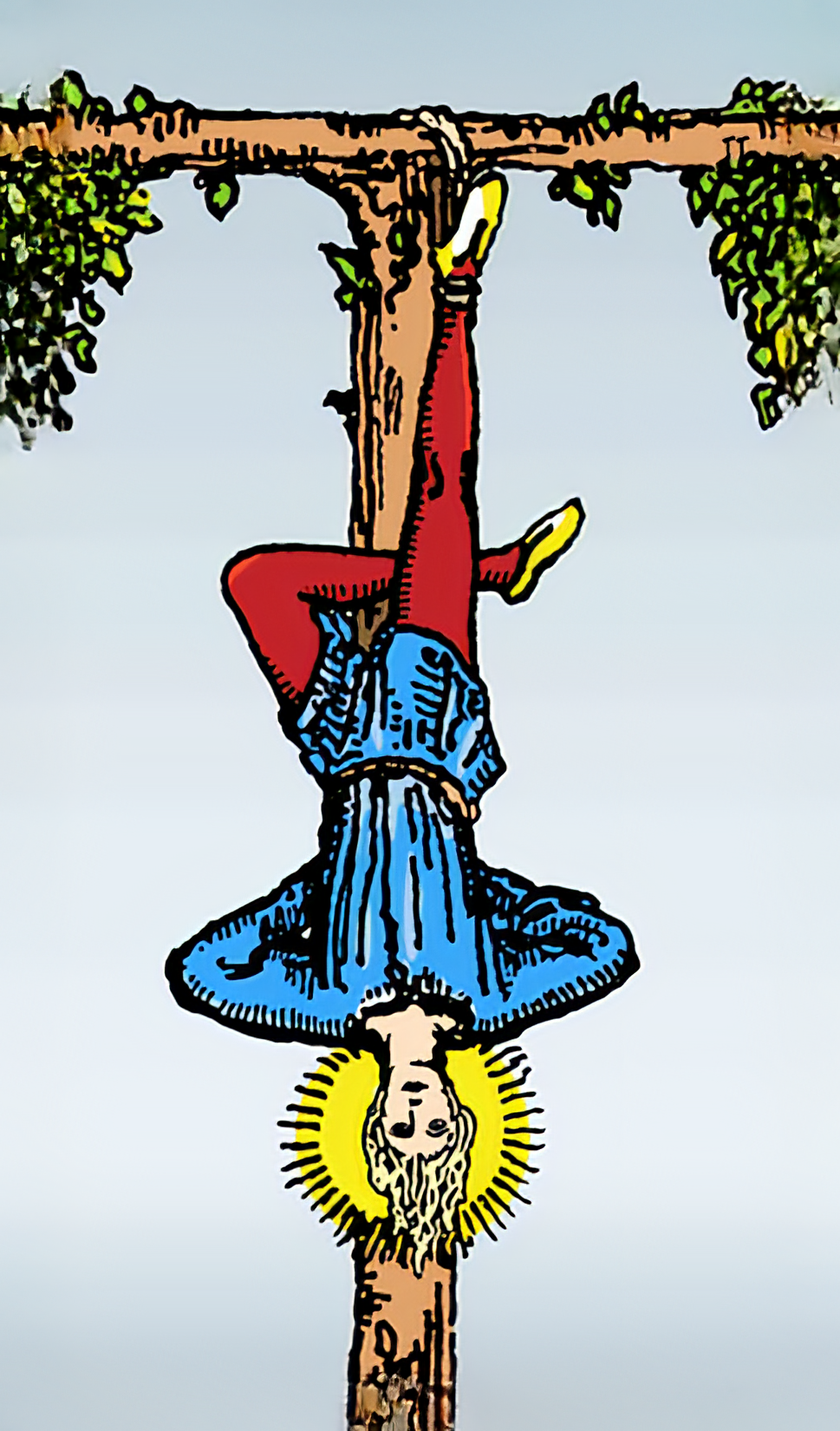 In this card, it depicts a man who is suspended upside-down, and he is hanging by his foot from the living world tree. This tree is rooted deep down in the underworld, and it is known to support the heavens. It is believed that the hanging man is actually positioned there by his own free will. We believe this because of the serene expression which is on his face. His right foot is bound to the branches, but his left foot remains perfectly free. At the same time, he is holding his hands behind his back in a way which forms an inverted triangle. His wearing of red pants are a representation of the physical body and human s passion, while the blue that he wears in his shirt are representative of calm emotions, a color combination that is commonly seen in saints. His intellect is symbolized by the yellow color of his shoes, hair and halo.


Hanged Man how someone sees you

Hanged Man as how someone sees you

- someone willing to sacrifice something or part of themselves for something better/greater. Can indicate them seeing person as willing to surrender perhaps;
- The Hanged Man signals, as you saw, a change in perspective, but it's usually accompanied by giving up some view strongly held before, thus opening yourself up to seeing things in a new way. The Hanged Man also indicates a time of suspension, so the message is not to press him or crowd him or keep asking how he's seeing you. For now, he's simply looking at you and re-thinking things. He's gaining a new perspective. Give him time to do that.

The reversal meaning of the Hanged Man card represents a very specific period of time during which you feel as if you are sacrificing a significant amount of time while getting nothing in return. You might have felt as if certain things are at a state of an absolute standstill without any particular resolution or movement. It s as if you are putting your entire effort and attention into something but nothing turns out as it should.

Letting go of some things from your past has brought new value to your spiritual life. That which you sacrificed must be seen in a new way.

If there is something being rushed, this may suggest that it is going to pause. Keep in mind that the act of giving help is not more important than the person being helped.

Many things are unknown to you now, so you must make new goals and plan carefully. Acting at the right moment will get you ahead.


Hanged Man yes or no

The Hanged Man suggests some sort of metamorphosis through breaking patterns, letting go, or going through a period of transition. Although it could indicate having to give something up in order to gain a fresh perspective, it has neither positive or negative connotations. Maybe is the answer.

Only registed users are able to comment
Moon
When we encounter the Moon, we see a path that leads off into the distance. On either facet of the direction stand a wolf and a dog, representing our animalistic nature - one is civilized, and the alternative wild and feral. There is a crawfish that is crawling out of the pond from which the path stems from. In the distance, we are able to see two towers flanking the central course, all over again alluding to the doubles seen in this card. Everything on this card appears to echo the opposite, as though to allude to 2 possibilities. When we stroll down the direction, we walk the pleasant line among conscious and unconscious, between the tamed facet of civilization of the dog, and the forces of nature represented with the aid of the wolf. The towers on the opposing ends represent the forces of proper and evil, and their similarity in appearance can allude to the problems that we face in distinguishing between them.
Read more
Justice
The Justice tarot card is a symbol of reality, fairness, and law. As she sits in her chair, the scales in her left hand represent how intuition must balance logic. She symbolizes impartiality with the double-edged sword in her proper hand. The clarity in thought that is required to dispense justice are symbolized by the rectangular at the crown she wears. Behind her, there may be a purple cloak and status gray pillars. Beneath her crimson cloak, which is held collectively via a clasp, she shows the tip of a white shoe. This is a religious reminder that what she gives you are the effects of their movements.
Read more
Six of Cups
The Six of Cups represent the joy of nostalgia, the consolation of domestic and early life innocence. In the cardboard itself, there are six cups full of white plants. Two kids are depicted in the foreground, and one is passing a cup to another. This handing of the vegetation from the boy to the girl shows the passing of traditions and satisfied reunions. The youngsters appear to be in a fort of sorts, that we will imagine provide them a feel of security and comfort.
Read more
King of Cups
The King of Cups is a card in the tarot that suggests generosity, manipulate, and emotional balance. The card itself depicts a king seated on a throne, who has an amulet this is fashioned like a fish. The fish in his necklace represents his creativity and spirit, which prospers on the calm waters that surround him. We can see from the heritage that there's a regular stability among the aware and unconscious. Behind the king, there is a fish jumping out of the sea at the proper side, and a deliver at the left side, consultant of the emotional and fabric worlds respectively. The King of Cups indicates which you do not suppress your impulses, however have found out to cope with them in a balanced manner.
Read more
Ten of Cups
On the Ten of Cups, there's a couple holding every different while dealing with a beautiful house and a inexperienced garden. Beside them, there are two children playing joyously. The couple is visible holding each other in a loving and romantic embrace, while the youngsters are freely playing. The couple seems to be in a stable courting, while also blessed with the abundance of a snug home and beautiful kids. The inexperienced land signifies fertility, and the river suggests how freely the feelings of the couple are flowing, meaning that their courting is pretty peaceful. Above within the sky, there are ten cups, shaped in an arc, which are intended to symbolize blessings from heaven. The rainbow at the back of them shows the quit of tough times and sorrows, and a new glad lifestyles in which every and each certainly one of the circle of relatives will revel in. The Ten of Cups card depicts ‘having it all .
Read more