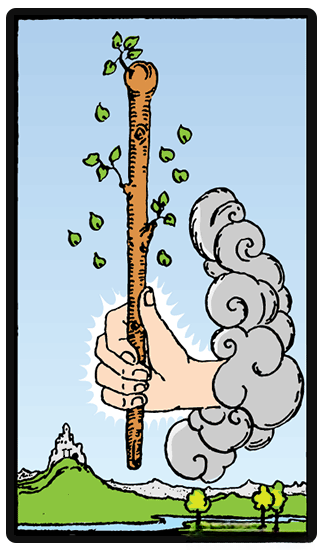 Wands are associated with fire energy, and the Ace of Wands is the core representation of fire within the deck. The card shows a hand that is sticking out of a cloud while holding the wand.
When we look at this card, we can see that the hand is reaching out to offer the wand, which is still growing. Some of the leaves from the wand have sprouted, which is meant to represent spiritual and material balance and progress. In the distance is a castle that symbolizes opportunities available in the future.

The reversed Ace of Wands indicates trials and tribulations that you will face in the near future. You might not have any direction, which leads to being uninspired or unmotivated. At this point of your life, you might not know what you really want to do. You don t know how to get out of the slump.
In the case that you already have a goal, you are not excited to achieve it. When you draw a reversed Ace of Wands, you should consider taking some time off to allow inspiration to come to you. You feel weighed down by your current commitments and responsibilities that you can t come up with new ideas, or muster the passion to push forward in your projects.
The Ace of Wands reversal meaning can also indicate delays with your current projects. You want to finish your tasks, but there are things that get in your way. Or you have an idea but don t know how to execute it and make it a reality. When this is the case, you should be patient and wait for the right time.


Lazdų asas yes or no